An Astrophysicist in the Legislature 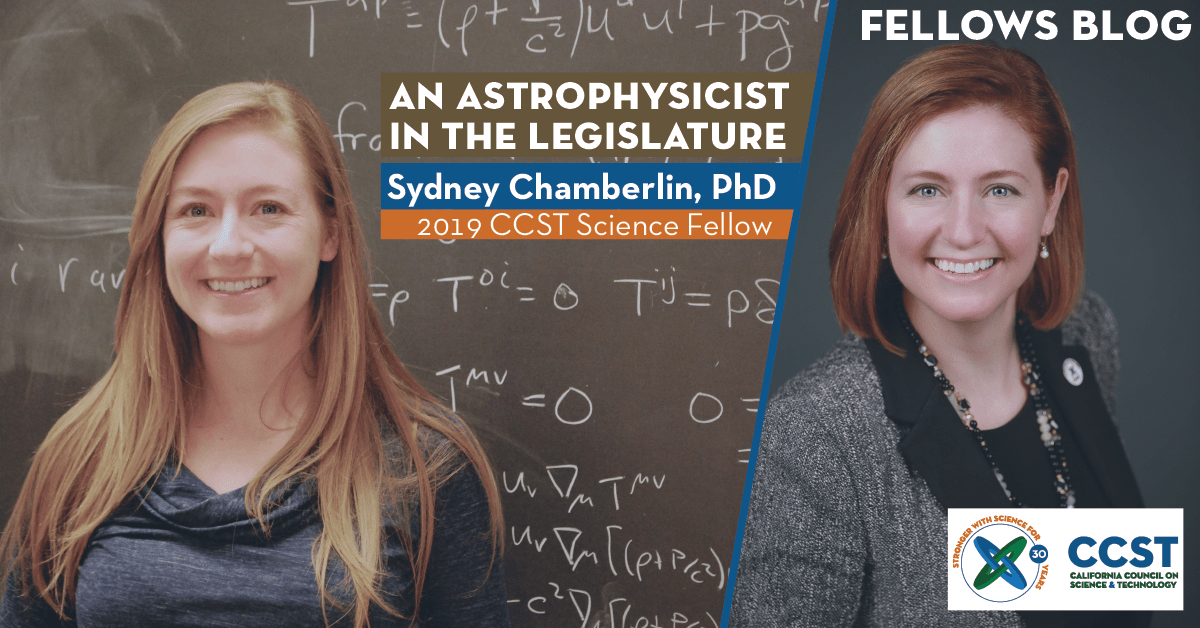 Sydney Chamberlin is a 2019 CCST Science Fellow. Sydney received a PhD in Physics from the University of Wisconsin-Milwaukee. In her research, she contributed to the first detections of gravitational waves, tiny cosmic ripples that carry vital information about the contents and evolution of the universe. She most recently served as a postdoctoral scholar at Penn State University and she also holds BS degrees in Physics and Math from Utah State University.

What happens when you drop an astrophysicist into a State Legislature?

This might sound like the beginning of a joke, but it was the question at the front of my mind as I prepared to move to Sacramento. I had accepted a position as a CCST Science Fellow, pursuing a long-held interest of mine in the policy world. I have to admit, though, I didn’t really know what to expect in my transition from astrophysics to policy—especially as a newcomer to California. I was both excited and nervous.

These skills proved to be immensely useful as we began working in the Capitol. After a whirlwind interview process with each of the potential placement offices, I was placed in the Senate Committee on Natural Resources & Water. This committee, like other policy committees, plays an important role in the legislative process. They meet throughout the year to debate the merits and goals of bills and create an opportunity for public input on legislation. I worked as a committee consultant, which meant analyzing bills on issues within my committee’s jurisdiction and shepherding the committee bills through the legislative process.  The committee jurisdiction includes the conservation and management of public resources, fish and wildlife, oil regulation, forestry practices, and more. I was also fortunate to have the opportunity to “staff” our Committee Chair on environmental quality issues, which involved tracking and briefing the Senator on the bills being heard by the Senate Committee on Environmental Quality.

Because of California’s long history of leadership on environmental issues and my personal interest on climate change impacts, I was excited to dive into the world of natural resources and water; however, I wondered how my background in astrophysics would fit with natural resources policy. As a professional physicist, I combed noisy data for tiny signals produced by black holes and other bizarre astrophysical objects, using advanced computational techniques – separating the signal from the noise. While some research topics seem to have clear and obvious ties to policymaking, no one has (yet) legislated about black holes, and I worried that my research skills might not carry over to the policy world in a meaningful way.

My fears were quickly put to rest as I started working in the Capitol. I realized that the tools I had used daily as a physicist – using logic to tease apart the dimensions of a problem, digesting complex information from diverse sources, and synthesizing my findings into writing that others could understand – were key elements of my legislative work. In some sense, I was doing exactly what I had as a physicist: separating legitimate facts and data from the “noise” of all available information.

But, the environment in which I used these tools was very different. The Capitol is a dynamic workplace, and our office had a steady influx of visitors, agendas, and bills. Timelines for projects were hours or days, instead of months or years like in academia. One of my initial challenges in the new work environment was cold-calling strangers, something I’d been wary of before starting the fellowship. The first time I had to call a lobbyist on a bill I was working on, I drafted a script of what I wanted to say before I felt comfortable calling. But, after just a few months, I now call everyone, for everything, without any worry!

As I near the end of my fellowship year, it is gratifying to reflect on the breadth of my experience as a CCST Science Fellow. I have sharpened my communication skills and built a solid understanding of the policymaking process. I’ve started to understand the nuances inherent to environmental policy in California. Also, it has been uplifting to see just how many people are genuinely striving to solve the problems facing California, and to know that science is a desired input to solutions.

Personally, I feel like my work in the Capitol has had real impact. A number of the bills I analyzed and helped to amend, as well as the two bills I carried through the legislative process for my committee (which I helped to write!), have been signed into law. I am eager to continue using my skills to create impact in my next role, where I’ll be serving as a policy associate for a large environmental nonprofit.