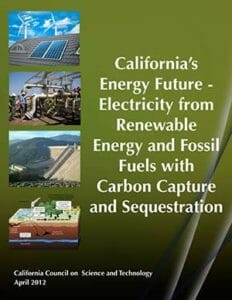 CCST has released a new publication as part of the California’s Energy Future (CEF) project, a study designed to help inform the decisions California state and local governments must make in order to achieve California’s ambitious goals of significantly reducing total greenhouse gas emissions over the next four decades.

California’s Global Warming Solutions Act of 2006 (AB32) and Executive Order S-3-05 set strict standards for the state to meet. In order to comply, California needs to reduce its greenhouse gas emissions to 80% below 1990 levels by 2050 while accommodating projected growth in its economy and population.

In a May 2011 summary report, an analysis first estimated how emissions could be reduced through modifications to demand, including aggressive efficiency and electrification. The new document, “Electricity from Renewable Energy and Fossil Fuels with Carbon Capture and Sequestration“, the fourth report in the CEF publication series, examines electricity generation through fossil fuel combustion with CO2 capture and sequestration (“fossil/CCS”) – a process that removes as much carbon as possible from major emissions sources such as power plants, and stores it in deep geological formations.

“[Carbon capture and sequestration] is the only other currently scalable technology besides nuclear energy that can easily provide many tens of GW of baseload capacity in a future electric grid that would otherwise become increasingly dominated by variable wind and solar generation,” notes the report. “However, there are still GHG emissions associated with fossil/CCS electricity; while small, they will contribute noticeably to a stringent statewide cap.” In addition, CCS is not yet a technology that can be deployed at commercial scale.

The report also examines the potentials of renewable energy as well. One of the principal issues facing increased reliance on renewable power generation such as solar and wind is its intermittent nature; in order to accommodate it, significant changes will have to be made to the way California stores and administers electricity.

“We are moving from a world where supply is controlled to follow demand, to one where demand must follow an increasingly uncontrollable supply,” says the report. “It perhaps represents a more significant change than the shift from traditional land-line telephones to cell phones…The need for advances in load balancing technology is one of the largest gaps in the energy technology portfolio.”