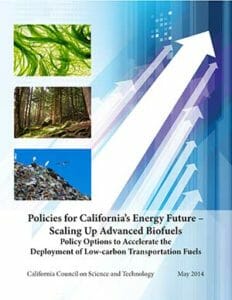 Advanced biofuels have the potential to provide California with economic opportunities while reducing greenhouse gas emissions consistent with the state’s climate and clean air policies. However, the state may not have sufficient incentives in place to attract the private investment to rapidly scale up production, according to a new report by the California Council on Science and Technology (CCST).

“California’s policy framework is already ahead of the rest of the country in terms of encouraging the development of low carbon biofuels,” said Bob Epstein, co-founder of E2 and Sybase and chai

rman of the NRDC Action Fund, one of the authors of the report. “It is the only framework that encourages maximum carbon reduction. However, low-carbon biofuels overall are at a relatively early stage of production, and policy changes can accelerate development and use of these fuels.”

Biofuels are fuels that can replace gasoline or diesel and are produced from natural resources, such as agricultural wastes, forest thinnings and harvest residues, municipal wastes, and purpose-grown energy crops such as perennial grasses and short rotation woody crops. In May 2013, CCST released an analysis of the potential role biofuels could play in to contribute to meeting the energy needs of California, particularly for transportation. The new report focuses on the private capital needed to scale up low-carbon biofuels and explores policies that the state could implement to encourage wider production and use of low-carbon biofuels.

“The capital for production facilities isn’t there yet,” said Epstein. “The state is essentially creating a new market for low-carbon fuels. California is already exceeding its current targets for implementing reduced carbon fuels as part of the LCFS. California need to evaluate how to accelerate production in order to meet long-term goals.”

As the report notes, California is in a unique position to capitalize on and expand an already effective policy framework to establish a more viable biofuels industry in the state.

“California has the potential for significant economic development through these incentives,” said Epstein. “This report suggests ways to modify state policies to allow the state to maximize this potential, and facilitate its planned emissions reductions over the coming decades.”