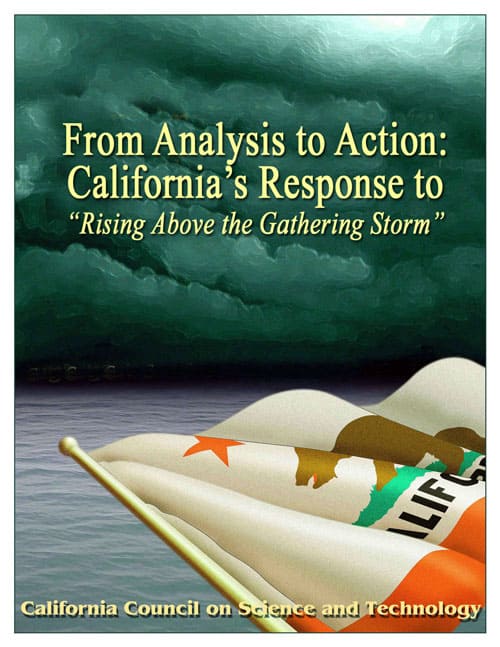 At the Governor’s request, CCST has convened four task forces directed by industry leaders to help California respond to the National Academies report Rising Above the Gathering Storm. This October 2005 report contains a strong message that the nation’s science and math education and economic environment need serious attention in order to safeguard the future prosperity of the nation.

“We are glad that the National Academies are emphasizing the importance of this message on a national scale,” said CCST Council Chair Lawrence Papay. “CCST is working to bring the results of this report to California policymakers. The long-term economic consequences for our state are too significant for us not to make substantial progress on this issue.”

The four task forces are identifying state assets and brainstorming about concrete actions that can be taken by government, business and industry, higher education, and federal laboratories in the state. The goal is to prepare a list of “actionable” items prepared by representative constituencies of CCST that have short-term and long-term components. Industry is the driver of the state’s economy, and S&T workforce issues affect industry directly; it is for this reason that CCST, with connections to industry, education, and the federal funded laboratories, was considered appropriate to develop this response and bring industry leaders into the task forces.

“CCST is especially well positioned to help the state understand its capabilities and to recommend strategies to meet these goals,” said Governor Schwarzenegger in his letter requesting CCST’s assistance. Each of the four task forces is focusing on one of the National Academies’ main recommendations related to increasing the talent-pool, research base and business climate.

Given the gubernatorial election in November 2006, there is an immediate opportunity to provide action plans to either the incumbent or new administration. To that end, this project was initiated as quickly as possible. In late September 2006, CCST presented its plans for California’s response at the National Academies’ Convocation on the Gathering Storm in Washington, DC, the task forces have been meeting through October, a final set of actionable items will be delivered to the Administration in December 2006, and CCST will maintain a catalytic role in rolling out the action plans in early 2007.

“I believe that with concerted effort by higher education, business, industry, CCST and its affiliates, California… will lead the nation in responding to the issues raised by the National Academies,” said the Governor.