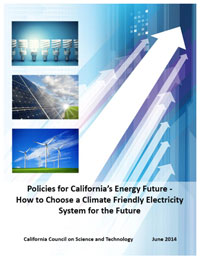 California must nearly eliminate emissions from electricity to meet ambitious climate goals for 2050, but each of the primary available technologies for generating emission-free technology has problems and any choice will require concerted planning and early strategic investments, according to a new technical paper by the California Council on Science and Technology (CCST).

“We should know what has to happen, what has to be gotten right and what must be accomplished in the near-term in order for California to be on track,” state the authors of “Policies for California’s Energy Future – How to Choose a Climate Friendly Electricity System for the Future.” The paper is the third in a series of documents which analyzes how California can effectively construct a policy framework to help the state meet its ambitious greenhouse gas (GHG) reduction goals over the coming years. The California’s Energy Future – Policy (CEF-P) project follows on CCST’s landmark California’s Energy Future (CEF) study, which explored the technical feasibility of California reducing its GHG emissions to 80% below 1990 levels by 2050 while still accommodating projected growth in its economy and population.

In the original CEF study, the possibilities of different energy producing technologies and combinations of technologies were assessed with regards to achieving California’s emissions goals. Each of these portfolios has different implications and requirements. For example, if the state were to focus on renewable energy sources (the “all renewables” portfolio) it would require that the electricity system be operated in a very different manner from today; relying on a mixture of renewable, fossil, and nuclear power (the “median” portfolio) would require a concerted change in California policy on nuclear power and a new focus on carbon capture and storage. The new paper focuses on policy issues pertaining to these two portfolios, as ‘bookends’ for different policy approaches that the state would have to consider.

“Choosing a Climate Friendly Electricity System” focuses on three issues characterizing three of the choices inherent in navigating a path towards one of these portfolios:

The importance of factoring in the full projected costs of scaling up any system to meet statewide requirements, as well as the feasibility of doing so within the timeframe needed, is essential to factor in.

“Any solution for de-carbonizing electricity in California faces obstacles and difficulties exacerbated by the state’s continually growing economy and population,” state the authors. “The scale of the problem is significant and the problem is urgent.” Outcomes are fundamentally uncertain for any path; the intermittent nature of renewable energy sources such as solar and wind power pose a challenge, as does lack of public support for nuclear power and market- and policy-driven limitations in carbon capture and storage. There are also many additional factors which need to be considered, including life-cycle analysis for all system components, public reaction to different land use issues, and better grid modeling.

“Nothing can substitute for real experience,” notes the report. “The more we can try out ideas for the new electricity system by actually building experimental, demonstration and pilot projects, the better the chances are that California can make informed decisions in planning and implementing a system capable of meeting both its power generation needs and its greenhouse gas emissions goals.”