SACRAMENTO, Calif. – The California Council on Science and Technology (CCST) released a report today advising the State of California to use security screening systems, similar to those in airports, in state prisons before investing millions in untested technology intended to block calls by inmates from contraband cell phones. (Click here to get the report.)

CCST encourages the California Department of Corrections and Rehabilitation (CDCR) to review and consider recommendations provided in its report. CCST urges the CDCR to consider a robust pilot project before implementing a managed access system (MAS), or any other technology across the CDCR facilities. Its report also provides recommendations and suggestions to insure the operational goals of MAS, or other technologies that CDCR might consider, are achieved. 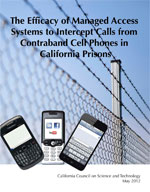 California State Senators Elaine Alquist, Loni Hancock, Christine Kehoe and Alex Padilla asked CCST to analyze the use of contraband cell phones in state prisons, and the viability of the technology approach referred to as MAS in blocking signals from phones smuggled into prisons.

MAS is currently used to block inmate calls in only one U.S. prison, a remote prison in Mississippi, which is having difficulty implementing and managing MAS to the level of performance desired. In theory, MAS will use a data base of authorized cell numbers as a filter to intercept calls from unauthorized numbers, then block those unauthorized calls from reaching cellular networks.

Inmate use of mobile phones is a growing problem throughout the country. While many inmates may use them to talk with family members and play games, they can also use them to order hits, intimidate witnesses and coordinate gang activities. In 2011, the California Department of Corrections and Rehabilitation (CDCR) reported that approximately 15,000 contraband cell phones were confiscated at California state prisons, but the number remaining could be much higher.

CCST’s report uncovers significant problems with MAS, which is among a number of options for preventing inmate cell phone use. For example, MAS could interfere with correctional and public safety cell phone use. If a prison is in a populated area, MAS could also prevent members of a surrounding community from making emergency cell phone calls to 911 because their numbers would not be on the MAS database.

The California Council on Science and Technology (CCST) is a nonpartisan, impartial, nonprofit created in 1988 by a unanimous vote of the California Legislature. It is designed to offer expert advice to the state government and to recommend solutions on science and technology-related policy issues. Its report was independently peer-reviewed by national experts including several from laboratories operated by the U.S. Federal government.

CCST notes the following issues, not only with MAS, but also with CDCR security procedures:

CCST acknowledges that CDCR tried to test MAS technology, but describes the test as “extremely limited in scope and scale, essentially a proof of concept trail rather than a full-fledged pilot program.”

“A more direct and cost efficient way to address the problem would be to stop or minimize cell phone entry into prisons with more consistent and complete screening of all personnel moving in and out of the prison confinement areas.” said Charles Harper, CCST Board Member and Chair of the Project Team that developed the report.