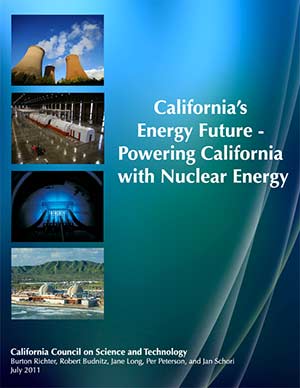 This report is aimed at examining the potential of nuclear energy to meet California’s electricity demand in the year 2050. The main focus of our analysis is on the CCST Realistic Model (described in detail elsewhere) which assumes that total electricity demand in California in the year 2050 amounts to 510 terawatt-hours per year (TWh/y). Since nuclear electricity is capital intensive, it is most economically used as baseload power where the plants run at their maximum output all of the time and that is what we assume here. We also assume that nuclear plants have a 90% capacity factor and that baseload power represents 67% of total electricity demand (adjusting the baseload fraction up or down does not affect the conclusions reached herein), the rest being supplied by renewables as mandated by California’s law AB32. This requires about 44 gigawatts (GW) of nuclear electricity capacity. This scenario and one scenario where nuclear electricity is deployed on a much larger scale (call the Stress Test) are described in section III. We also assume that a large scale growth in nuclear energy in California will be part of a large scale growth worldwide which affects infrastructure and work force requirements as discussed below. Consequently, our analysis assumes that California only gets its fair share of resources needed to scale up, but an expanding nuclear industry results in economies-of-scale which makes nuclear power less expensive for California.1 Some of the scenarios used in the full report include use of hydrogen as a fuel. Hydrogen can be produced using nuclear reactors though doing so efficiently requires a new generation of nuclear plants. Requirements for hydrogen production are also briefly discussed. Section II of this report looks at costs; section III focuses on the realistic and extreme scenarios; section IV examines fuel availability; section V looks at site issues; section VI discusses the spent fuel problem; and section VII briefly touches on weapons proliferation. Section VIII is a story line; what has to be done on the State, Federal, and industrial levels to make this kind of nuclear expansion possible. Section IX gives some preliminary comments on the nuclear accidents at Fukushima nuclear power plants in Japan which were triggered by a massive earthquake and tsunami. Appendices 1-3 go further into fuel availability, waste disposal, and future options (including fusion).