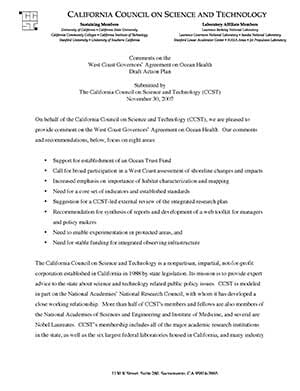 In September 2006 the Governors of California, Oregon and Washington announced the West Coast Governors’ Agreement on Ocean Health. The Agreement launched a new, proactive regional collaboration to protect and manage the ocean and coastal resources along the entire West Coast, as called for in the recommendations of the U.S. Commission on Ocean Policy and the Pew Oceans Commission. A draft Action Plan was prepared by October 2007, and the architects of the Agreement requested that CCST prepare a formal commentary on the plan.