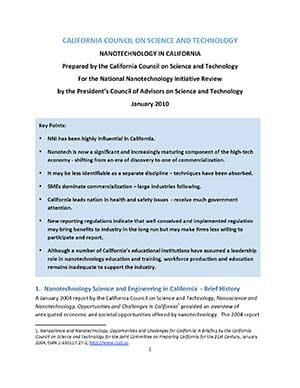 California has been a national leader in proactively developing policy frameworks for burgeoning technologies such as nanotechnology; for example, California’s state government has been actively engaged in raising the awareness of health and environmental issues in nanotech. The President’s Council of Advisors on Science and Technology (PCAST) is looking at such state-level policy frameworks and in January 2010 asked CCST to present an overview of California’s nanotechnology policies.