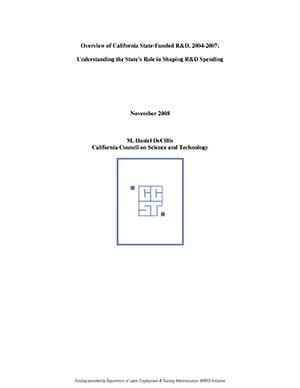 Research and development (R&D) funding has undergone significant shifts in pattern over the last several decades. In response to flat or declining federal funding for various R&D efforts, as well as federal policy restrictions on funding for certain areas of research (e.g. stem cell research), states have come to take a more direct role in funding R&D. There exists a variety of indicators tracking R&D spending, but few focus on the state level. The most comprehensive assessment of R&D spending in California was carried out by CCST in 1999, building on a survey initiated by the State Science and Technology Institute two years previously.

The current project is intended as an update to the 1999 report, incorporating data from a variety of sources including a new survey conducted by the National Science Foundation (NSF) and the U.S. Census Bureau. It is part of an overall assessment of the present status and long-term trends affecting California’s science and technology infrastructure for the California Innovation Corridor project, funded by a U.S. Department of Labor grant to the state of California and the California Space Authority titled, “Workforce Innovation in Regional Economic Development” (WIRED).