At the request of the State Legislature the California Council on Science and Technology (CCST) proposes to conduct a comprehensive assessment of California’s “science and technology (S&T) innovation ecosystem,” (specifically human capital, investment, and infrastructure), analyzing and reporting current global innovation systems, and recommending to the Legislature actions that should be taken to sustain the state’s role as a global leader in science and technology. 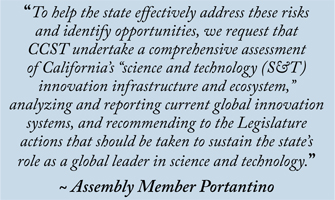 Many leading organizations have issued reports e.g., Rising Above the Gathering Storm, Innovate America, etc., that cite three foundational building blocks to innovation — Talent, Investment, and Infrastructure. A comprehensive approach to addressing these building blocks reflects an “innovation ecosystem.” Today the term innovation is viewed as a central tenet to economic success globally and cited as “a fundamental issue of our time.” California has long been known as an international leader in creativity and innovation, especially in science and technology. Whole industries — biotechnology, computer hardware and software, semiconductors, wireless communication, and aerospace, to name a few — were spawned from companies originating in California. These industries not only built a vibrant economy in the state, but also provided benefits to people across the U.S. and around the globe who now have vastly improved access to medical treatments, agriculture, automation, information and entertainment. 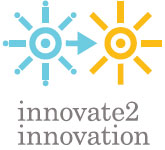 One of the most important catalysts for California’s innovation ecosystem has been the state’s investment in science, technology and higher education. No other region of the world has matched the quality of California’s array of public and private colleges and universities, as well as federal research laboratories. Through state investments, and investments from federal and private sector sources, the state has provided exceptional preparation for its citizens to pursue careers in engineering and the sciences; attracted the most talented students from around the world to study in California and remain in the state to launch new high tech companies; and create a culture in which university and laboratory faculty start businesses that employ thousands of citizens.

However, there is now a general sense that California’s historic economic success and prominence through an S&T innovation ecosystem is at risk — threatened by the potential erosion of the pre-eminent science, technology and education infrastructure that made the state great. Factors contributing to this perception include the state’s disinvestment in its higher education institutions, and a diminished agility to respond to continuing and accelerating globalization of industry, the emergence of virtual campuses, and the evolving innovation process.

Given the fast paced evolution and globalization of the S&T innovation ecosystem and the impact to California’s economic prosperity, CCST propose to undertake a comprehensive study to:

This study will be a roadmap to guide California and other states’ innovation ecosystem investment to further the nation’s leading role in innovation and entrepreneurship.