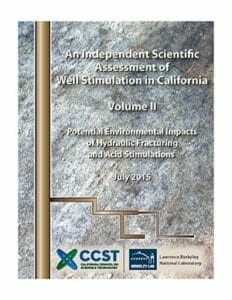 SACRAMENTO – In collaboration with the Lawrence Berkeley National Laboratory (Berkeley Lab), the California Council on Science and Technology (CCST) today released a peer-reviewed independent scientific assessment that discusses how hydraulic fracturing and acid well stimulation could affect water, atmosphere, seismic activity, wildlife and vegetation, and human health in California. The report also identifies knowledge gaps and alternative practices that could avoid or mitigate these possible impacts.

The report was prepared for the California Natural Resources Agency in response to Senate Bill 4. Issued today are the second and third volumes in a three-volume CCST study of hydraulic fracturing and acid well stimulation in California. Volume I was released in January 2015.

“We applaud state leaders for seeking an independent scientific assessment to inform policy choices about hydraulic fracturing and acid stimulation. CCST was created as an independent organization via the Legislature to do exactly this kind of careful scientific evaluation,” said CCST Executive Director Dr. Susan Hackwood.

A science team composed of Berkeley Lab researchers and subcontractors developed the findings based on publicly available data, original analyses, and a review of relevant literature.

CCST appointed members of a steering committee based on technical expertise and a balance of viewpoints. “CCST assembled a steering committee for this report from some of the finest experts on oil and gas production, environment, water, risk assessment and geology,” said CCST’s Dr. Jane C. S. Long, the Steering Committee Chairman and science lead of the assessment.

Dr. Jens Birkholzer, the Principal Investigator of the assessment and Division Deputy of Berkeley Lab’s Earth Sciences Division, added, “A highly qualified group of scientists with many years of research experience worked intensely for over a year to collect, analyze and interpret a wide variety of available information on hydraulic fracturing and acid stimulation in the state. ” Dr. Long adds, “This study would not have been possible in this short timeframe without the expertise and Herculean effort of the Berkeley Lab team.”

The steering committee in collaboration with the science team developed conclusions and recommendations under seven major principles designed to improve the safety of hydraulic fracturing and acid stimulation in California:

Maintain, expand and analyze data on the practice of hydraulic fracturing and acid stimulation in California.

Based on a review of published literature and official and voluntary databases, one-fifth of oil and gas production in California over the last decade came from wells that had been subject to hydraulic fracturing. Compared to practices in other states, current hydraulic fracturing in California tends to be performed in shallower vertical wells as opposed to horizontal and requires much less water per well. Operators in California use about 800 acre-feet (about a million m3) of water per year for hydraulic fracturing. This does not represent a large amount of freshwater compared to other human water use. Depending on the local scarcity of water, recycling the water used to create hydraulic fractures may have modest benefits. Far more water is used for enhanced oil recovery using water or steam flooding in the same fields, and large volumes of water of various salinities and qualities get produced along with the oil. Produced water from oil and gas production, appropriately tested and treated, has potential for beneficial reuse. The report recommends identifying opportunities for water conservation and reuse in the oil and gas industry as a whole.

The report also points out the need for improving and modernizing public record keeping for oil and gas development.

Near-term expanded production in the Monterey Formation seems unlikely, but the state should request a reliable, scientific assessment of this potential. The report identifies the footprint of potential production in the Monterey Formation and none of this geography is more than 20 km from existing oil and gas production. The state should monitor drilling into this formation as an indication of potential new production. Use of hydraulic fracturing will most likely continue in and near existing oil fields in the San Joaquin Basin and to a lesser extent in other areas of California.

Account for and manage both direct and indirect impacts.

Direct impacts of hydraulic fracturing are caused by the activity of hydraulic fracturing itself. All the major potential direct impacts identified in this study (such as potential contamination of groundwater) are due to the use of hazardous chemicals. The report recommends full disclosure of chemicals used, disallowing the use of any chemical that has unknown environmental properties, and limiting the use of hazardous chemicals to avoid some of the potential impacts.

The report finds that operators dispose of over half of the produced water from hydraulically fractured in pits which allow water to percolate into the ground and thus could contaminate groundwater. The report recommends phasing out disposal in percolation pits unless appropriate testing, treatment and regulatory oversight are implemented.

The report also concludes that, to date, there have been no recorded cases of induced seismicity linked to disposal of produced water by underground injection in California, but given the risks seen in other regions and California’s propensity for earthquakes, more research and monitoring is needed.

This assessment did not find recorded negative impacts from hydraulic fracturing chemical use in California, but no agency has systematically investigated possible impacts. The report does identify a few locations in the San Joaquin Valley and Los Angeles Basin where shallow hydraulic fracturing occurs near protected groundwater. This presents the possibility that groundwater may be at risk and recommends that these situations get closer attention, monitoring and oversight.

One important possible pathway for hydraulic fracturing chemicals to leak is through hydraulic fractures intersecting other nearby wells. The report recommends a review of the effectiveness of regulations designed to prevent these potential subsurface contamination pathways.

Understand and control emissions and their impact on environmental and human health:

In California, oil produced from hydraulically fractured reservoirs emits fewer greenhouse gases per barrel than oil produced in other ways, such as steam injection.

The report also notes that toxic air pollutant concentrations may be more elevated near active oil and gas development than regional averages. The report recommends measuring toxic air contaminant concentrations and monitoring health risks and impacts near all oil and gas wells to assess the need for further controls. Such controls may include emissions controls and limits on the proximity of oil and gas development to human populations to protect human health.

The report identifies a set of important data gaps and detailed research priorities to address many remaining unanswered questions about the impacts of well stimulation-enabled oil and gas production in California, and recommends establishing a standing scientific advisory committee to inform decisions on the regulation of oil and gas development.

The full three-volume report, a summary report and an executive summary can be viewed here.

The Summary Report summarizes the issues in all three volumes and provides all the conclusions and recommendations for the series.

The California Council on Science and Technology is a nonpartisan, not-for-profit corporation established in 1988 via a unanimous vote of the California Legislature. Bringing together world-class expertise from academia, the national labs, companies and a broad array of Senior Fellows who are distinguished scientists and technical experts, CCST offers expert advice to the Governor, the Executive Branch and the Legislature on science and technology-related policy issues. In recent years, CCST has produced a series of reports on California’s technical innovation, water, energy, STEM and digitally enabled education.

Lawrence Berkeley National Laboratory addresses the world’s most urgent scientific challenges by advancing sustainable energy, protecting human health, creating new materials, and revealing the origin and fate of the universe. Founded in 1931, Berkeley Lab’s scientific expertise has been recognized with 13 Nobel prizes. The University of California manages Berkeley Lab for the U.S. Department of Energy’s Office of Science. For more, visit www.lbl.gov. The Office of Science is the single largest supporter of basic research in the physical sciences in the United States, and is working to address some of the most pressing challenges of our time. For more information, please visit science.energy.gov.