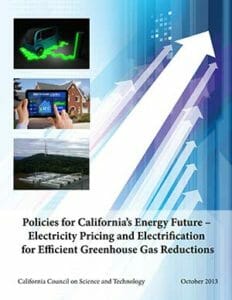 The California Council on Science and Technology (CCST) has released the first report in a new series which analyzes how California can effectively construct a policy framework to help the state meet its ambitious greenhouse gas (GHG) reduction goals over the coming years. The California’s Energy Future – Policy (CEF-P) project follows on CCST’s landmark California’s Energy Future study, which explored the technical feasibility of California reducing its GHG emissions to 80% below 1990 levels by 2050 while still accommodating projected growth in its economy and population.

“Understanding the technical aspects of energy technologies is only the first step towards building a sounder energy future for California,” said CCST Council member Jane C.S. Long, Former Principal Associate Director at Large and Fellow in the LLNL Center for Global Strategic Research for Lawrence Livermore National Laboratory, who is the CEF-P committee chair. “This study will help connect the technical findings of the CEF project with the realities and concerns of policy and implementation.”

The report “Policies for California’s Energy Future: Electricity Pricing and Electrification for Efficient Greenhouse Gas Reductions” is authored by Lee S. Friedman, an economist and Professor of Public Policy at the University of California at Berkeley. It discusses pricing policy modifications that will help to make decarbonization and electrification decisions effectively and efficiently. As the report notes, California needs to adopt pricing reforms as part of an integrated strategy to achieve its long-term goals of reducing GHG emissions. Friedman says it is particularly critical that we smoothly transition beyond the 2020 goal of AB32 to continue reductions in the 2020-2030 period.

“The better alignment of prices with costs is one key element to improving pricing policies,” notes the report. “Costs include not only the private costs incurred by individuals and businesses that provide goods and services, but also costs to society – for example, the harm from air pollution. When air pollutants like GHG emissions are completely unpriced, a distortion in the market results.”

The report identifies key recommendations for policy changes that would help to implement electrification in California:

“The report’s recommendations seem to be gaining some traction with policymakers,” Friedman noted. For example, the state legislature has just passed AB 327, which will allow the CPUC to pass on the carbon price signals. In addition, the Air Resources Board, in its recently-released draft update to the Scoping Plan, provides a recommended 2030 interim GHG emission reduction target, and the Governor has taken the lead in promoting new and innovative partnerships between California and other jurisdictions by signing an agreement with China to share information and personnel related to state-run carbon trading systems, allowance auctions, and other practices involved in regulating and controlling carbon emissions. The CPUC is also considering methods to expand the use of time-varying rates within the state. “This is a promising beginning to the important work that California policymakers have before them in order to lead us beyond 2020 to an environment that is healthy and sustainable for the long-run,” said Friedman.