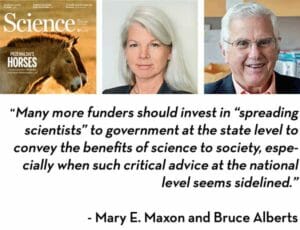 SACRAMENTO, Calif. – The CCST Science & Technology Policy Fellowship program was hailed as a strong and effective model for bringing sorely needed science and technology expertise to state legislatures around the country in an editorial written for Science Magazine by Mary Maxon, Associate Laboratory Director for Biosciences at the Lawrence Berkeley National Laboratory, and CCST Board Member Bruce Alberts, chancellor’s leadership chair for science and education in the Department of Biochemistry and Biophysics at the University of California, San Francisco. The Science editorial followed a similar opinion piece co-authored by Alberts and Maxon in a recent issue of the Proceedings of the National Academy of Sciences.

“The establishment of S&T fellowship programs in other states could greatly increase evidence-based policy-making and not only benefit state policy-makers but also help to inform national policy-making and society as a whole,” they said in the editorial.

The CCST Science & Technology Policy Fellowship trains and mentors scientists and engineers in the policymaking process, and places them as staffers with Assembly and Senate offices. The program is celebrating its tenth year in 2018 and has had a significant positive impact; as Maxon and Alberts note in their editorial, a majority of former CCST Science Fellows reported in a 2017 survey that they were able to provide input that corrected technical interpretations by legislative offices, and that former legislators revealed that working with the Fellows added value to their office in many ways.

“Based on the survey we conducted in March 2017, I believe that we have real evidence to say that the Fellows have had a substantive impact on policy in California,” said Maxon in a follow up interview. “I am pleased that the notion that such fellows could have value at the state level appears to be true in a relatively short timeframe.”

The CCST Science Fellows program is only one of several ways in which CCST works to fulfill its mandate of serving as the convener and translator of scientific and technological knowledge for California’s leadership. A nonpartisan, nonprofit organization established via the California State Legislature in 1988 and sustained by California’s leading research institutions, CCST responds to and engages the Capitol policy community with impartial advice and expertise by leveraging its network of experts across the University of California, California State University, California Community Colleges, Stanford, Caltech, and the NASA and Department of Energy federal laboratories. This engagement ranges from providing expert testimony to producing short emerging topic reports, such as its December 2017 overview of the maker movement in K-12 education, to more in-depth analyses and reports, such as its January 2018 assessment of natural gas storage.

Maxon, who has been involved with the CCST Science Fellows program since its conception, expressed the hope that the idea of bridging the gap between the scientific and policy communities will gain more traction now that the Fellows have demonstrated a positive track record. She and Alberts noted in the Science editorial that even in California, it was difficult to find placements for the inaugural class of CCST Science Fellows in 2009, whereas now they are in great demand by legislative offices. There is also work to be done in the research community as well, she notes, where some but not all recognize the value of science policy training.

“It would be great if more professors and academic administrators encouraged their students to aspire to careers as science policy professionals,” said Maxon. “Their help in training the next generation of S&T policy leaders would have tremendous impact.”

CCST, with the support of the Gordon and Betty Moore Foundation and the Simons Foundation, has already been working to help other states develop programs similar to the CCST Science Fellows Program, awarding planning grants to nine states in 2017. Active progress and conversations have continued across this multistate working group, which convened recently during the February 2018 AAAS Annual Meeting in Austin, Texas.

Maxon added that the editorials in Science and PNAS will hopefully encourage more people in the scientific community to support the development of similar connections elsewhere in the US.

“I hope that more states will create successful programs tailored to the needs of their governments so more evidence-based policymaking is facilitated throughout the country,” she said. “Because we chose scientific outlets [for the editorials], I also hope that many professors who aren’t aware of the value of S&T policy fellowships – at the state or national level – see that careers in science policy are important ones for them to inspire their students to pursue.”