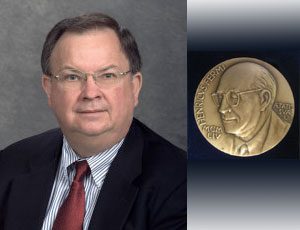 Charles “Chuck” Shank, CCST Senior Fellow and former director of the Lawrence Berkeley National Laboratory, has been named as a recipient of the Enrico Fermi Award. The Fermi Award has been presented to outstanding scientists since 1956 in recognition of “distinguished achievement, leadership, and service related to all basic and applied research, science, and technology” supported by DOE and its programs.

“Chuck Shank is an outstanding scientist and remarkable leader in keeping with the very best of the Berkeley Lab tradition,” said Berkeley Lab Director Paul Alivisatos. “As the Lab’s director, he helped make the Advanced Light Source a world-leading center for soft X-ray science, and, with the launching of the Molecular Foundry, he helped usher [the Department of Energy] into a new era of nanoscience and biotechnology. For his many contributions, he is most deserving of the Fermi Award and our sincere gratitude.”

Shank, a nationally recognized scientist and research leader, served as Director of the Lawrence Berkeley National Laboratory from 1989 through 2004. He had a unique triple appointment as professor at UC Berkeley, in the departments of physics, chemistry, and electrical engineering and computer sciences. He graduated summa cum laude from Berkeley in 1965 and went on to receive his M.S. and Ph.D. Following graduation, he joined AT&T Bell Labs where he made pioneering contributions to the study of ultrafast events that occur in a millionth of a billionth of a second using short laser pulses. He contributed to fiber optic communications with the invention of the distributed feedback laser, a component in high data rate transmission systems.

In receiving the Fermi Award, Shank was cited for “the seminal development of ultrafast lasers and their application in many areas of scientific research, for visionary leadership of national scientific and engineering research communities, and for exemplary service supporting the National Laboratory complex.”

One of the original CCST Council members in 1988, Shank was one of the first Senior Fellows appointed when the program was inaugurated in 1997. The CCST Senior Fellows include many of California’s most distinguished and accomplished scientists and technical experts, who work with CCST to unlock and leverage California’s science and technology expertise and provide advice to state and local government, the education sector and the federal government on science and technology public policy issues of importance to California. Shank is the fifth Senior Fellow to receive the Fermi Award.

“I am thrilled and humbled to receive this recognition,” said Shank. “I wish to acknowledge colleagues, post docs and students who were instrumental in our pursuit of understanding the world of ultrafast events, where things happen in a millionth of a billionth of a second.”

Other honors awarded to Chuck Shank include the R.W. Wood Prize of the Optical Society of America and the David Sarnoff and Morris E. Leeds awards of the Institute of Electrical and Electronics Engineers. He is an elected member of the National Academy of Sciences, the National Academy of Engineering, and the American Academy of Arts and Sciences. He is a Fellow of the American Association for the Advancement of Science, the American Physical Society, the Institute of Electrical and Electronics Engineers (IEEE), and the Optical Society of America.

“CCST is proud of all our distinguished Senior Fellows,” said CCST Board Chair Charles F. Kennel, distinguished professor of Atmospheric Science at Scripps Institution of Oceanography. “We are prouder still that Chuck Shank has joined a particularly distinguished group of CCST Senior Fellows who have won the Fermi award, the government’s highest honor for energy research: the late Harold Agnew, Sidney Drell, John S. Foster Jr., and Burton Richter. We offer Chuck our congratulations and our thanks for his many years of dedication to CCST.”