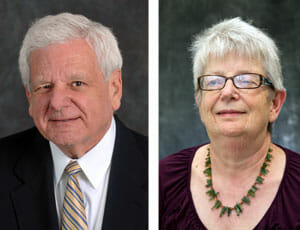 The California Council on Science and Technology (CCST) has added two distinguished scientists to its Board of Directors, which provides strategic vision and direction for CCST. The new appointees, Albert Carnesale PhD of the University of California, Los Angeles (UCLA) and Alexandra Navrotsky PhD of the University of California, Davis (UC Davis) join a board of distinguished leaders from academia and industry, including those representing CCST’s Sustaining Institutions and Federal Laboratory Affiliates.

“Dr. Navrotsky and Dr. Carnesale have made exceptional contributions to their respective scientific fields and applications on the global stage,” says CCST Board Chair Charles F. Kennel PhD. “Their deep insights and experiences into the societal importance of science and technology will greatly inform CCST’s mission and service to State leaders in California.”

Albert Carnesale is Chancellor Emeritus and Professor Emeritus at UCLA. He joined UCLA in 1997 and was Chancellor of the University through 2006, and Professor of Public Policy and of Mechanical and Aerospace Engineering through 2015. He is the author or co-author of six books and more than 100 articles on a wide range of subjects, including national security strategy, arms control, and nuclear proliferation. Under his leadership, UCLA garnered recognition and accolades for excellence and launched numerous interdisciplinary endeavors, including the California NanoSystems Institute and the Institute for Stem Cell Biology and Medicine. Prior to his time at UCLA, he had a distinguished 23-year career at Harvard University, where he served as Dean of the Kennedy School of Government, and as Provost and Acting President. Carnesale is a Member of the National Academy of Engineering and of the Council on Foreign Relations, and he is a Fellow of the American Academy of Arts and Sciences and of the American Association for the Advancement of Science.

Alexandra Navrotsky is Distinguished Professor with appointments in the Departments of materials Science and Engineering, Chemical Engineering, Chemistry, Earth and Planetary Science, and Land, Air and Water Resources at UC Davis. Professor Navrotsky’s research interests lie at the intersection of solid state chemistry, geochemistry, and materials science. Her work focuses on measuring thermodynamic properties of solids and relating them to structural parameters, and chemical bonding in a systematic fashion. She is Director of the UC Davis Organized Research Unit on Nanomaterials in the Environment, Agriculture and Technology (NEAT-ORU) and has published more than 700 scientific papers. Her numerous awards include the Urey Medal (the highest career honor of the European Association of Geochemistry), the Benjamin Franklin Medal in Earth Science, the Roebling Medal – the highest honor of the Mineralogical Society of America, the Goldschmidt Medal (the highest career honor of the Geochemical Society), and the Kingery Award (the highest career honor of the American Ceramic Society). She has been elected to membership in the National Academy of Sciences, the American Philosophical Society, and the World Academy of Ceramics.

“Chancellor Carnesale and Professor Navrotsky are joining us at a truly exciting time for CCST – the 30th anniversary of our charter via the California State Legislature,” says CCST Interim Executive Director Amber Mace PhD. “CCST was created to help make California’s policies stronger with science, and I am truly excited to work alongside Dr. Carnesale and Dr. Navrotsky as we usher in a new decade of policy service to the Golden State.”

About the CCST Board of Directors