Making the Move (Literally): From Science to Science Policy in Sacramento 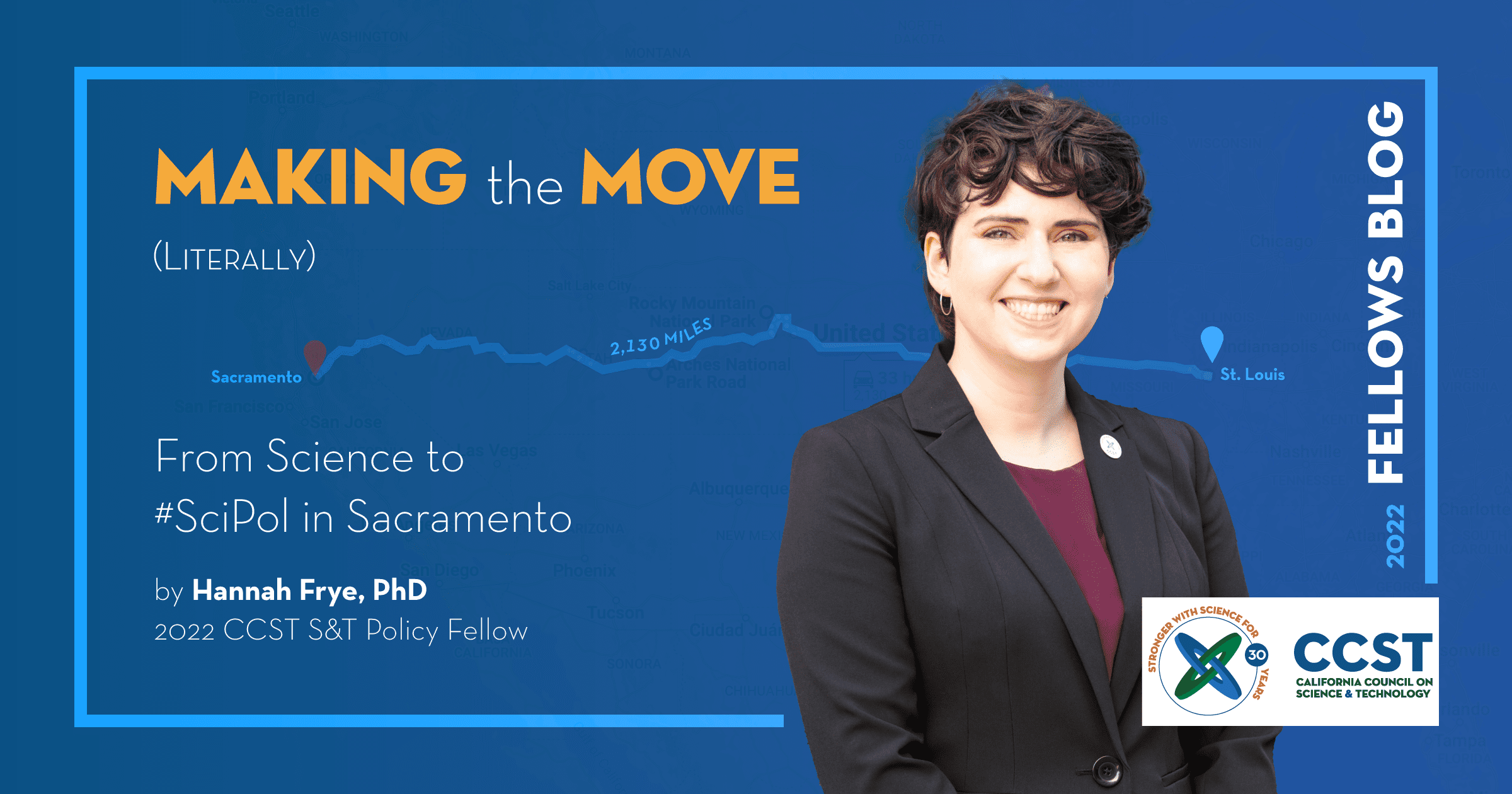 Hannah Frye, PhD, is a 2022 CCST Science & Technology Policy Fellow placed with the California State Senate Business, Professions, & Economic Development Committee. From Missouri, Hannah studied the role of genetics and sex on memory mechanisms underlying opioid use disorder risk. She earned her PhD in Neuroscience from Washington University in St. Louis and a BS in Chemistry with a Biochemistry emphasis from the Missouri University of Science & Technology.

Packing up my tiny hatchback—and taking advantage of every square inch—the car that I mostly used to shuttle back and forth from lab on the streets of St. Louis suddenly transformed into my shuttle for an adventure out west. After all, the road from Missouri to California is an adventure, full of diverse and gorgeous landscapes: wide-open plains, snow-tipped mountains, desert plateaus, and shining salt flats.

Crossing the Continental Divide on Highway 70 at 11,158 feet above sea level, the boxes I had so carefully stacked high in the back of my tiny hatchback began to shift precariously with each grade of the steep incline—inching up like the beginning of a roller coaster. My cat, tired of napping in her carrier, balanced herself on top of the boxes and suitcases to get a better view of the alien landscape seen only by a rare few Midwestern housecats. After making it to the summit and through the Rockies, we then put my little adventuring vessel’s brake pads to the ultimate test, driving down the western slopes of the Rocky Mountains. Needless to say, we made it safely to Sacramento in one piece with (mostly) everything intact.

Like the changing geography, coming from the Midwest to join the 2022 cohort of the CCST Science & Technology Policy Fellows program meant adjusting to myriad cultural changes. Yet despite some differences, there are more similarities than many people might think.

Meet Me in St. Louis

For anyone (ahem my coastal friends) who considers the Midwest to be “flyover country,” I’d encourage you to visit. Midwestern states like Missouri are home to a rich array of communities, history, cultural centers, universities, and industries.

One cannot paint Missouri with a single brush.

Whether in coastal cities or America’s heartland, there is a critical role for scientists in developing effective evidence-based policies.

Politically, the state is far more diverse than it may seem on the surface. Missouri is home to both established and emerging political figures across both sides of the aisle, and the state has been a site of significant political activism for civil rights, housing accessibility, environmental justice, and many other issues. My experience in Missouri at Washington University in St. Louis provided a rich environment for me to develop as a policy-minded scientist, including engaging the challenging and devastating impacts of the opioid epidemic.

Learn More: Missouri is also home to our friends at the MOST Policy Fellows program, which welcomed their second class of Fellows in September 2021.

In St. Louis and the Midwest, opioid use disorder devastated many communities as the US confronted the opioid epidemic. For my doctoral work, I was drawn to the lab of Dr. Jose Moron-Concepcion, which studies the intersection of pain, opioids, and drug-associated memory. I investigated the role of genetics and sex on memory mechanisms which may contribute to opioid use disorder risk. My research prompted me to start engaging policy makers about the importance of our work for the surrounding community.

I met with Missouri representatives during several Capitol Hill days organized by groups advocating for scientific funding increases such as the Society for Neuroscience and the Rally for Medical Research. In each meeting, I was encouraged by how supportive Missouri legislators were of biomedical research and of scientists working in their districts. Legislators across the political spectrum and from very different regions of the state all agreed that biomedical research funding was important to Missouri and that scientists should have stable access to the necessary resources to conduct our science.

I love Missouri. So making the move to California was not an easy choice for me, and I was a little nervous about making such a big change.

However, Sacramento has proven to be an exciting place for me to transition into a career in science policy. Coming to California, I had very little knowledge about the cultural or policy landscape, but the CCST Fellows monthlong training program provided immensely helpful and practical knowledge from former Fellows and policy professionals and leaders in State government. For me, I felt like I hit the ground running.

Nestled in between the gold-rush era mountain towns of the Sierra Nevada and the coastal sprawl of Bay area, Sacramento hosts a familiar diversity of worldviews, geopolitical landscapes, and communities. Like St. Louis and Missouri, it would be a disservice to portray Sacramento and California as a monolithic block. Whether it be housing reform, climate change, or immigration policy, California politicians and their constituents voice a wide range views. This rich political climate provides a prime opportunity for scientists such as me to gain new experiences in policy.

Whether in coastal cities or America’s heartland, there is a critical role for scientists in developing effective evidence-based policies. And like St. Louis, Sacramento is flat and friendly to my tiny hatchback, which is still taking me on exciting adventures throughout California.

The CCST Science & Technology Policy Fellows program trains scientific thinkers to be policy-savvy, while helping equip California’s decision makers with science-savvy staff. The program was established in 2009 with funds from the Gordon and Betty Moore Foundation and other generous friends. Discover how our CCST Science Fellows make a difference in California’s policy arena at ccst.us/ccst-science-fellows-program.