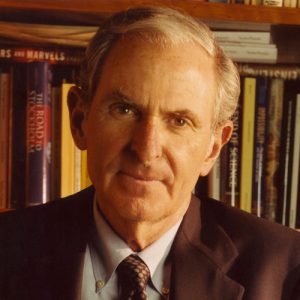 The California Council on Science and Technology has changed significantly from its beginnings in 1988, when the need for an organization like CCST hit home as the state lost bids for both a superconducting supercollider and SEMATECH – a microelectronics research consortium – to Texas.

“The state needed a way to more effectively leverage its substantial S&T assets,” said David Goodstein, who has been appointed as one of CCST’s new fellows. “We needed to bring together people from academia and industry in a constructive collaboration that could enhance the collective scientific infrastructure of the state.”

Goodstein, former vice provost and professor of physics and applied physics at Caltech, is no newcomer to CCST. He was, in fact, one of the founding members of the board of directors.

“We didn’t really have any state analogues to use as a model,” noted Goodstein. “CCST was founded along the lines of the National Research Council instead. Since then CCST’s operations have expanded significantly.”

Indeed, CCST is now involved in several projects a year ranging from education to energy, and policymakers frequently involve CCST in the planning stages of new S&T related inquiries and legislation. In fact, keeping up with the demand for its services has become challenging for CCST.

“I think CCST’s greatest challenge in the years to come will be ensuring that it has the capacity to address the range of S&T policy issues facing the state,” said Goodstein. “Now that CCST has established itself as an impartial source of S&T expertise, it faces more requests than it can handle. We have to be sure that CCST remains able to keep up with the demand for its services.”

Goodstein, whose distinguished accomplishments include the Oersted Medal of the American Association of Physics Teachers, and the John P. McGovern Medal of the Sigma Xi Society, has served on and chaired numerous scientific and academic panels, including the National Advisory Committee to the Mathematical and Physical Sciences Directorate of the NSF. But he counts his time with CCST among his achievements.

“I look forward to working with CCST in my new capacity as a fellow,” said Goodstein.