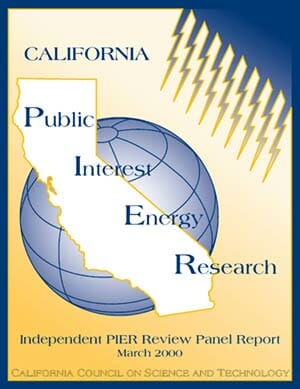 The PIER Program was established to fund research, development, and demonstration projects that focus on renewable forms of energy. The program was created when California’s electricity industry was restructured in 1996. As of December 2000, the CEC had awarded approximately $105 million in projects, small grants, and memberships. Many of the projects have the potential to reduce energy demand, improve system reliability, or address environmental issues.

The CEC asked CCST to nominate a 12-member independent review panel to evaluate the PIER program’s public value and make recommendations to the Legislature and the Governor.

The PIER interim report was delivered to Governor Gray Davis and the Legislature in March 2000 (the final report was released in 2001). The CEC also commissioned CCST to perform a similar review in 2004 and 2005.

Principal recommendations in the interim report: