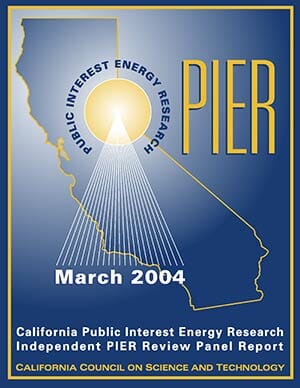 In 1996, Assembly Bill 1890 restructured the California electricity industry. Legislation also authorized collection of a surcharge on retail electricity sales to ensure a continuation of public interest energy research, development, and demonstration (RD&D) projects. The PIER program was established at the California Energy Commission in 1998 to implement this provision. California leads the nation in fostering and implementing new sources of electricity to sustain its economy while preserving its natural environment. The contributions of PIER to this effort were recognized by legislation extending its original charter through 2012.

The interim report notes that the PIER program has implemented many of the recommendations made in the 2001 report; according the the new report, the principal problems facing PIER at present are organizational limitations. The IRP concluded that PIER needs greater independence and that its management structure and relationship with the CEC need to be reconsidered if the program is to achieve its maximum potential.