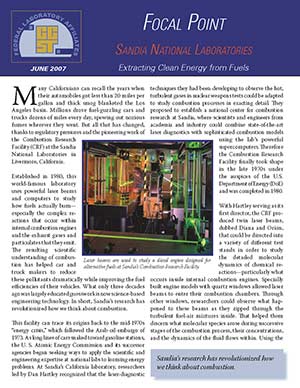 Many Californians can recall the years when their cars got less than 20 miles per gallon and thick smog blanketed the Los Angeles basin. But all that has changed, thanks in large part to the pioneering work of the Combustion Research Facility (CRF) at the Sandia National Laboratory in Livermore. The facility was born in the energy crisis of the 1970s, when researchers recognized that laser-diagnostic techniques developed to observe nuclear weapons tests could be adapted to study combustion processes. CRF research has led to major improvements in the efficiencies of burning coal, oil, natural gas, and even wood. For example, CRF research discovered that energy-conversion efficiencies in natural gas furnaces can be doubled with the use of pulsating jets of gas, a simple modification that has since been incorporated in many residential and commercial heating applications. But the principal thrust of CRF research remains in transportation, which accounts for over 40 percent of California’s total energy use. A group of CRF researchers has been studying and developing a new generation of low-temperature internal-combustion engines. By operating with lean fuel-air mixtures at temperatures below 2000 degrees C, these advanced diesel and spark-ignition engines should virtually eliminate soot and nitrogen-oxide formation. At the same time, their fuel-burning efficiencies can be improved by up to 50 percent over existing engines.