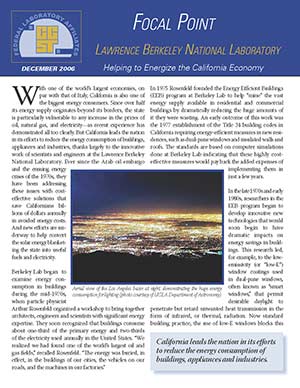 With one of the world’s largest economies, California is also one of the biggest energy consumers. California leads the nation in its efforts to reduce the energy consumption of buildings, appliances, and industry, thanks largely to the innovative work of scientists and engineers at the Lawrence Berkeley National Laboratory. Berkeley Lab began to examine energy consumption in buildings during the mid-1970s, when particle physicist Arthur Rosenfeld helped create the Energy Efficient Buildings (EBB) program, which soon led to the Title 24 building codes in California requiring energy-efficient measures in new residences. The total statewide cost savings due to these codes is now estimated at $4 to 5 billion annually, according to the California Energy Commission. Subsequent EBB work on energy consumption standards has contributed to a 2/3 reduction of energy usage by new refrigerators, specialized inexpensive roofing materials that absorb substantially less sunlight, research in low-energy LEDs, and the new multidisciplinary Helios Project. Among other things, Helios researchers are seeking higher-efficiency methods to transform solar energy bound up in crop wastes into useful ethanol and hydrogen by mimicking the biological digestive processes performed by bacteria found in the guts of termites.