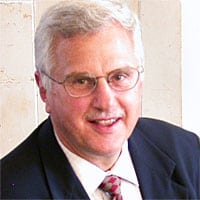 Bruce Alberts, who has served on the CCST Board of Directors since 2006, has been selected by the American Association for the Advancement of Science (AAAS) to serve as editor-in-chief of its journal Science. The appointment takes effect in March 2008.

AAAS President and Nobel laureate David Baltimore, a CCST Fellow, praised the selection of Alberts in a statement released earlier this week. “His experience, skill, and interest in all of science make him the ideal person to continue the tradition of superb editors who have made Science the premier journal for the scientific community.”

Bruce Alberts joined CCST as a member of the Board after completing two terms as president of the National Academy of Sciences, returning to his faculty position at the Department of Biochemistry and Biophysics at the University of California, San Francisco. During his tenure at the National Academies, science education was a cornerstone of his presidency; among other projects, Alberts led the effort to develop the landmark National Science Education Standards, which provide a vision for excellent science learning for all students. He also helped establish the National Teacher Advisory Council, and was instrumental in developing the California Teacher Advisory Council (Cal TAC) with CCST upon his return to California.

Widely recognized for his work in the fields of biochemistry and molecular biology, Alberts has earned many honors and awards, including 14 honorary degrees. He currently serves on the advisory boards of more than 10 non-profit institutions.

“This is an exciting new step in a very distinguished career,” said CCST Executive Director Susan Hackwood. “We have been extraordinarily fortunate to benefit from Bruce’s vision and expertise during the past two years, and look forward to his continued success at Science.”

Alberts will succeed Donald Kennedy, president emeritus of Stanford University and a former commissioner of the U.S. Food and Drug Administration, who has served as Science editor-in-chief since 2000.