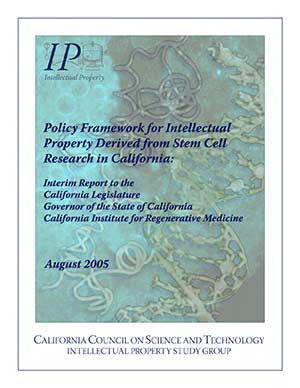 This report was released in partial response to Assembly Concurrent Resolutions (ACR) 252 and 24 authored by Assembly Member Gene Mullin. ACR 252, which was chaptered in September 2004, requested that CCST conduct an analysis on how and whether to implement a set of consistent statewide IP policies. Following the November 2004 passage of Proposition 71 (the Stem Cell Research and Cures Initiative), which allocated $3 billion over 10 years to establish CIRM, CCST also agreed to prepare an interim report tailored specifically to CIRM’s needs and faster timetable.

The IP Study Group, convened by CCST to recommend intellectual property guidelines for the state, released the interim report to begin a discussion and provide policymakers with a framework for consideration in the development of policies for the handling of intellectual property developed with state funds, especially in relation to stem cell research.

Overall the committee recommended that CIRM adopt an approach to managing intellectual property that would be consistent with related federal policies. As there are no other states as yet which have established a comprehensive set of IP policies, the federal model was felt to be most appropriate. These recommendations include permitting ownership of the intellectual property to reside with the grant recipients, with CIRM retaining rights to use the research, and focusing on maximizing access to the research rather than controlling prices of the ultimate products of this research.

The IP Study Group’s recommendations in the interim report are consistent with general principles likely to be recommended for state-funded research in the final report to be completed later this year. These general principles assert that the IP policy:

With these general principles in mind, the IP Study Group recommends that CIRM consider policies that accomplish the following: