The twenty-year history of CCST’s evolution and accomplishments has been outlined in a new report, “A Voice for the Future: The First Two Decades of the California Council on Science and Technology”.

“Our organization has changed significantly since its founding 20 years ago, and has in many ways come to fulfill its original mandate,” said CCST Board Chair Karl Pister. “We feel that this document helps put the full scope of those efforts and changes into perspective, and illustrates both the challenges that CCST has helped California face, as well as the goals we seek to achieve in the coming years.”

The report documents how the first Council meeting, held in 1989, drew considerable attention, with the San Jose Mercury News describing CCST as “a high-powered effort to preserve and expand the state’s economic base by combining the resources of academia and industry.” 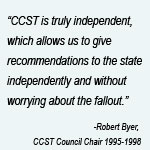 linkages between CCST and state officials that would lead to much more broadly targeted initiatives. Before long, we were in a position to help a more comprehensive agenda to shape the issues needing addressing for California.”

The first such step took the form of the California Report on the Environment for Science and Technology (CREST), an unprecedented snapshot of the state’s S&T strengths and weaknesses. The widely inclusive 1999 report brought together ten separate research reports to build a comprehensive roadmap of issues needing long-term study.

“CREST helped lead to reports on emerging technologies, such as genetically modified foods and nanotechnology; science and math education; the role of the federally funded laboratories in California; and energy research and development, among other things,” said Pister. “We are very pleased to have been able to provide useful information to California’s policymaking community in these instances.”

As part of the anniversary commemoration, Hackwood and Pister presented an overview of this history to the University of California Board of Regents, outlining the role of CCST in California’s 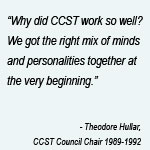 science and technology policy analyses over the past twenty years, and highlighting the important role that UC plays in CCST’s operations. UC is a sustaining CCST institution; similar presentations will be made at the other sustaining institutions this year, to help demonstrate what their support has helped accomplish through CCST.

“Building integrity and authority is something you can’t do overnight,” said Pister. “It is a credit to the staff and the volunteers who have done an extraordinary job, carefully balancing points of view and bringing the best judgment possible to problems.”