Changes in the Innovation Economy

At the February and May 2010 meetings, changes, threats and opportunities in California’s innovation capacity were discussed.

The February meeting initiated a dialog on the changing context of innovation in S&T. Excellence in science and engineering is not enough to be a world leader – we need to be more creative, and look to radical innovations using social and cultural advantages as seen with Google, YouTube, eBay, and Yahoo. We also need new kinds of scientists and engineers with communications skills, multicultural understanding and foreign languages.

From Closed to Open Innovation

Henry Chesbrough, Haas School of Business, UC Berkeley, observed that the traditional closed innovation model, which has provided great successes in the past for industries such as Edison, GE, Rockefeller, and Standard Oil, has shifted due to five ‘erosion factors,’ including increasingly mobile trained workers; more capable universities; diminished U.S hegemony; the erosion of oligopoly market positions; and an enormous increase in venture capital. “The open innovation model involves a lot more external technology insourcing and spinoffs,” said Chesbrough. “Good ideas are widely distributed today. Companies need to recognize that not all of the smart people in the world work for them, and that industrial R&D has become a distributed system.” 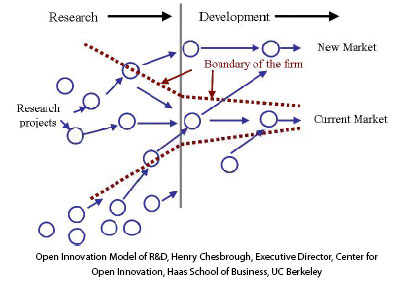 Key S&T Areas with Most Change:

What Has Changed in Healthcare

David W. Martin, Jr., M.D., Chairman and CEO of AvidBiotics Corporation, noted that the volume and complexity of data available has changed tremendously. “This offers the opportunity for deeper personalization in healthcare,” he said, “along with more interventional options. However, it also has led to accelerating costs.” It will take a generation to effectively retrain physicians to use these data effectively, as well as other healthcare workers and patients. “The rate of innovation in healthcare has been outstanding,” said Martin. “However, we must innovate the processes of applied care in order to capture the output of all the innovation.”

George Blumenthal, Chancellor, UC Santa Cruz, gave an overview of the University of California’s role in publicly funded research from 1998 to 2007. “Since 1997, UC total R&D expenditures have exceeded 9% of all expenditures at U.S institutions,” Blumenthal noted. “However, we need to adapt to changing financial models as a way of preserving excellence while meeting the needs of California.” The state-funded operating budget for UC was reduced by 20% in the 2009-10 fiscal year, and although the next budget has promised to restore over $300 million, “we need to face up to the issue of privatization if public funds are not forthcoming,” according to Blumenthal.

The May 2010 CCST meeting continued the innovation ecosystem dialogue begun in February. The discussion focused on four critical changing sectors in California: aerospace, federal laboratories, virtual campus, and energy. In each sector, infrastructure, human capital, and investment were addressed. The prevailing crosscutting themes cited a critical need for attracting and retaining talent; fostering a climate of new and innovative ideas and research; and sustaining investment.

Each of these game changers shared three pivotal components that fostered innovation intelligent people, financial commitment, and inspiration for innovation. Nurturing this century’s innovation ecosystem must be seeded with these three components.