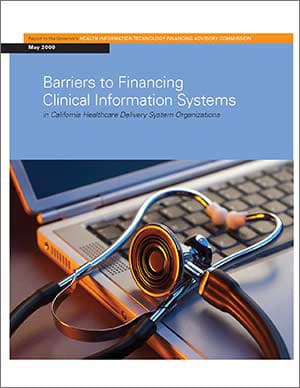 The worsening of the financial crisis since September 2008 has made it more difficult to finance new clinical information systems (CIS) in the near term, but newly approved federal funding for healthcare information technology (HIT) has the potential to offset these challenges, according to a newly released report by researchers at the University of California, San Francisco and CCST.

The report, Barriers to Financing Clinical Information Systems in California Healthcare Delivery System Organizations, was prepared for the Health Information Technology Financing Advisory Commission (HITFAC), and is the culmination of several years of discussion on the adoption of HIT fostered by CCST.

In preparing the report, researchers conducted over 100 interviews of California stakeholders, used quantitative data from the Office of Statewide Health Planning and Development and other sources, obtained information on private/public CIS financing initiatives within California, conducted over 30 interviews with managers of CIS programs in other states, and reviewed literature. The project summarized its findings, and presented policy options to HITFAC members.

Widespread adoption of HIT, such as readily accessible, standardized electronic patient records, has significant potential to save California as much as $8 billion annually from greater efficiency and reduced medical errors. However, it is expensive to adopt HIT systems and train personnel in their use.

The report suggests that policy interventions would be most helpful in mitigating an increasing ‘digital divide’ between financially healthy healthcare systems which see upgrading CIS as a cost of doing business, and facilities serving disadvantaged and rural areas, which cannot afford to invest in systems upgrades without assistance from state or federal programs.

“Cutbacks in Medicaid at the state level, because of the economic downturn, will further weaken financing opportunities for smaller and financially weaker borrowers,” said report author Robert Miller, professor of Health Economics at UCSF. “Increased funding from the federal American Recovery and Reconstruction Act (ARRA) will be more important than ever in the face of this shortfall.” The Act allocates $36 billion over six years for HIT, including about $34 billion in Medicare and Medicaid CIS adoption incentives, to be paid out during 2011 to 2016, with another $2 billion allocated for HIT “infrastructure.”

“Expanding and combining grant-making will be key in the years to come,” said Miller. “Stakeholders need to work together to ensure that their efforts, both financial and technological, are coordinated in order to succeed.”