Science and Technology Innovation in California 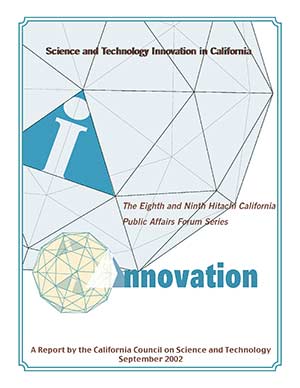 From 1987 through 2002, Hitachi ran a series of forums as a platform to find solutions to problems facing California and the nation. In 2001 and 2002, Hitachi sponsored two public affairs forums to assess new paradigms for innovation and the risks that face such innovation in California.

CCST organized the eighth and ninth Hitachi California Public Affairs Forums entitled, respectively, “New Paradigms for Innovation in Science and Technology (December 3, 2001) and “Innovation at Risk” (May 17, 2002). Hitachi and SRI International partnered with the University of California Institute for Medico and the United States (UC MEXUS) as well as the California Department of Technology, Trade and Commerce to produce both events; the Keck School of Medicine of the University of Southern California joined as a partner to host the May forum.

In both forums experts gathered to discuss the science and technology innovation process, the roles played by industry, academia, and government, and the challenges to be faced by all three.

The first forum initiated a period of research culminating in the second forum, which produced the following policy recommendations: