CCST honored retiring Sacramento Director Annzell Loufas at its May 2008 meeting, where she received commendations from both the Legislature and Lieutenant Governor John Garamendi as well.

“It is a great pleasure to honor and commend Ms. Loufas,” said Garamendi. “On behalf of the people of the State of California, I applaud her for her distinguished achievements as Director of the CCST Sacramento Office.”

Loufas has worked for CCST since 1996. In the twelve years that she worked for CCST, she was primarily responsible for liaising with the Legislature, Governor’s office, and state agencies. She has played an instrumental role in virtually every major CCST project of the past ten years ranging from the groundbreaking California Report on the Environment for Science and Technology (CREST) in 1999 to the California response to “Rising Above the Gathering Storm” in 2007.

“Annzell has been an indispensable and much-valued cornerstone of CCST’s operations in Sacramento,” said Executive Director Susan Hackwood. “She has long been a familiar face in the halls of the Capitol and her combination of skill, experience, and tenacity has been invaluable in enabling CCST to connect with the right people in the State at the right time. She will be sorely missed.” 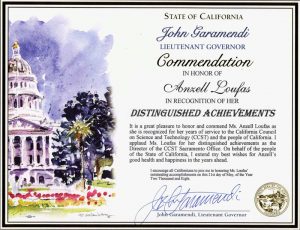 Prior to joining CCST, Loufas worked as a senior higher education administrator at the California State Colleges and University system and at a private community college as a vice president and chief fiscal officer. She served on several National Science Foundation and National Aeronautics Space Administration Task Forces, and chaired the twenty six college American Indian Higher Education Consortium Steering Committee for Computer Science and Engineering; she also served on the board of the Association of Departments of Computer Science and Engineering with representatives of the Historically Black Colleges and Universities. She served on the Northern Deans of the California State Universities and Colleges task force that designed system wide initiatives adopted by the Chancellor’s Office. Her experience in legislative affairs made her a uniquely effective and valued agent for CCST.

“Ms. Loufas has shown outstanding dedication and effectiveness,” noted the certificate of recognition from the Assembly. “[Her] professional and highly personable manner, broad knowledge and outstanding networking ability among Legislators, staff and public officials in all levels of government and academia have made her an outstanding emissary for the mission of the California Council on Science and Technology.”