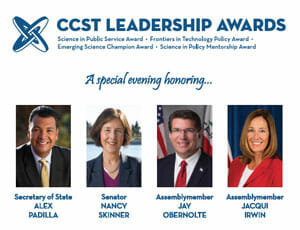 SACRAMENTO, Calif. – The California Council on Science and Technology (CCST), a nonpartisan, nonprofit organization established via the California State Legislature to serve state leaders, is proud to announce the inaugural recipients of its CCST Leadership Awards.

“California state legislators have a long history of incorporating scientific advice into their decision-making process, because they understand that California’s policies are stronger with science,” says Amber Mace, Deputy Director of CCSTand a former Assistant Secretary at the California Natural Resources Agency. “It’s time that we celebrated our state’s vanguard position in evidence-based policymaking and science-informed leadership. CCST is proud to call attention to our four honorable awardees – whose consideration of science and technology have made a difference in the Golden State.”

The awardees will be recognized during the CCST Science & Technology Week Reception and Leadership Awards Ceremony, Wednesday, February 21, 2018, 5:00 to 8:00 p.m., at Cafeteria 15L in Sacramento. The greater Capitol community is invited to attend; RSVP here.

The four award categories and our 2018 recipients are:

Given to a current or former Legislative Member with training in science or engineering who has gone on to lead a distinguished career in policy and public service, while continuing to incorporate science advice and address science-related policies throughout their leadership roles.

“Not many seasoned policymakers can boast of their beginnings as an engineering student at MIT. Secretary Padilla not only comes from a science and technology tradition, but as a California state legislator, he repeatedly leveraged scientific curiosity towards finding solutions in the public interest, from earthquake safety to energy policy. His long career serves as a wonderful model to scientists and engineers pondering a professional path in public service, and we are most honored to have Secretary Padilla accept our 2018 CCST Science in Public Service Award.” – Amber Mace, CCST Deputy Director

Given to a current Legislative Member whose legislative actions are addressing the impact of new technology on Californians, including laws, regulations, higher education, or workforce and economic development.

“An aviator, a software engineer, and an entrepreneur, Assemblymember Obernolte has parlayed his computer science training at Caltech and UCLA and his technology industry experience into a career in state leadership. He has repeatedly considered the role and impact of data accessibility and security in his legislative actions – maintaining a vigilance for the potential implications of new technology in order to anticipate unmet needs in California’s policies. For that, we are most pleased to have Assemblymember Obernolte accept our 2018 CCST Frontiers in Technology Policy Award.” – Amber Mace, CCST Deputy Director

Given to a current Legislative Member whose legislative actions early in their career have consistently considered scientific evidence and advice.

“As a second-term legislator, Assemblymember Irwin has already made waves with significant bills encouraging the application of science and technology towards California’s economic and societal well-being. Nationally, she has taken leadership as Chair of the Cybersecurity Task Force for the National Conference of State Legislators. In California, her work on AB 2664 have brought fresh energy to boost research entrepreneurship at UC campuses, keeping California at the forefront of global innovation. Inspiring and fitting for a UC San Diego engineering alumna – and among the many reasons we are excited to have Assemblymember Irwin accept our 2018 CCST Emerging Science Champion Award.” – Amber Mace, CCST Deputy Director

Given to a current or former Legislative Member whose participation and guidance have contributed deeply to the CCST Science & Technology Policy Fellowship program, which recruits and trains PhD scientists and engineers to work as legislative staff in Sacramento.

“Successful future leaders arise from dedicated mentors today, and this is particularly true for our CCST Science Fellows program, where PhD scientists and engineers take a bold leap from academia to train and serve in the dynamic world of California policymaking. Over the course of her Assembly career, Senator Skinner mentored CCST Science Fellows on four occasions – and all four Science Fellows have gone on to successful careers in public policy, including one current Chief-of-Staff and one current Committee Consultant. The lessons our Science Fellows learned while with her office have made a lasting impact on their individual paths in policy and public service, and for that, we are most grateful to have Senator Skinner accept our 2018 Science in Policy Mentorship Award.” – Amber Mace, CCST Deputy Director

CCST Science & Technology Week revives a tradition last celebrated in 1999 by the California State Assembly and in 2000 by the California State Senate. The 2018 CCST S&T Week coincides with the 30th anniversary of Assembly Concurrent Resolution 162 (Farr, Garamendi) in 1988 – which called for the creation of the California Council on Science and Technology to “respond appropriately to the Governor, the Legislature, and other relevant entities on public policy issues significantly related to science and technology.” 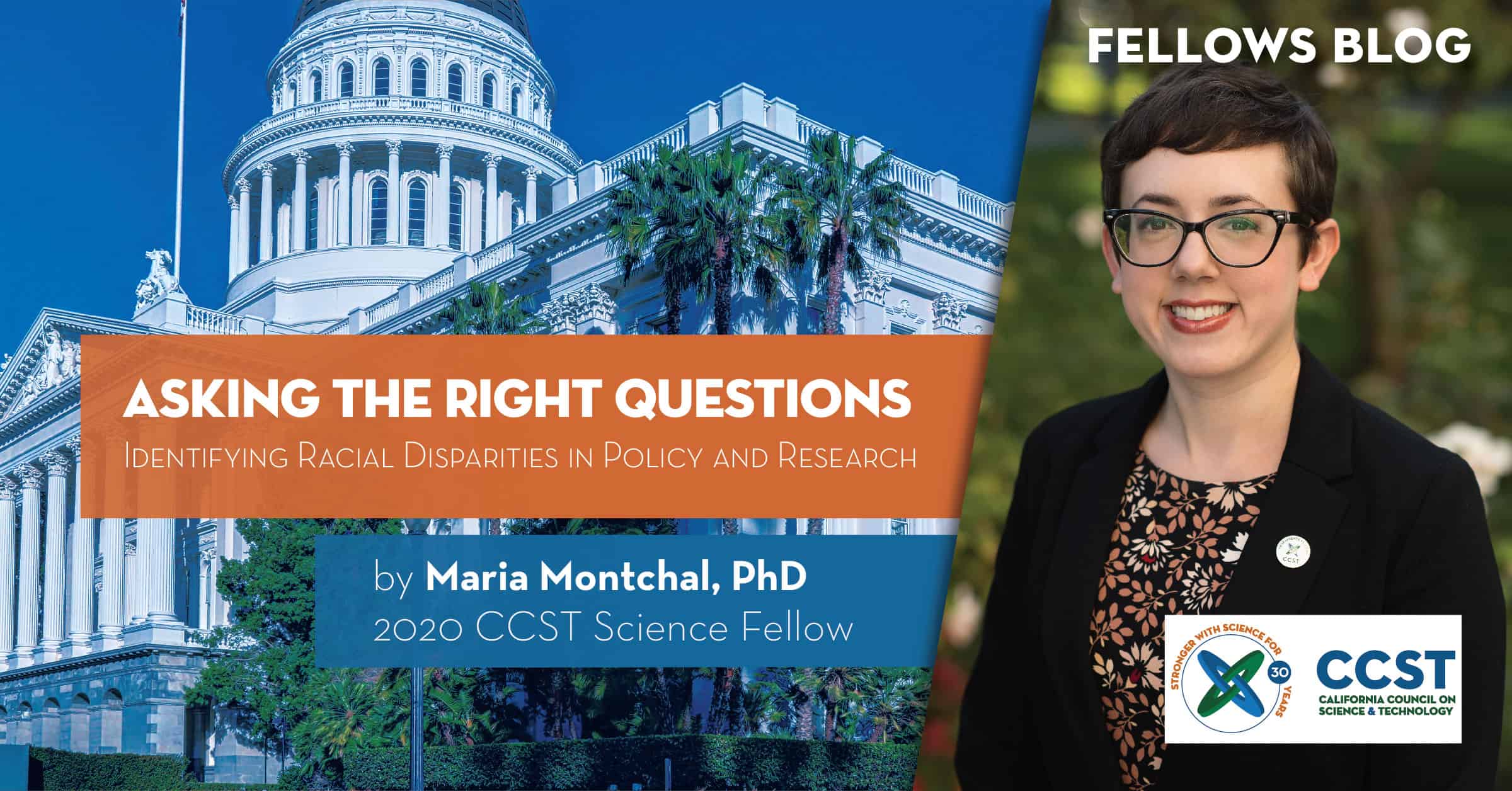 Maria Montchal is a 2020 CCST Science & Technology Policy Fellow who was placed in ...
Read More 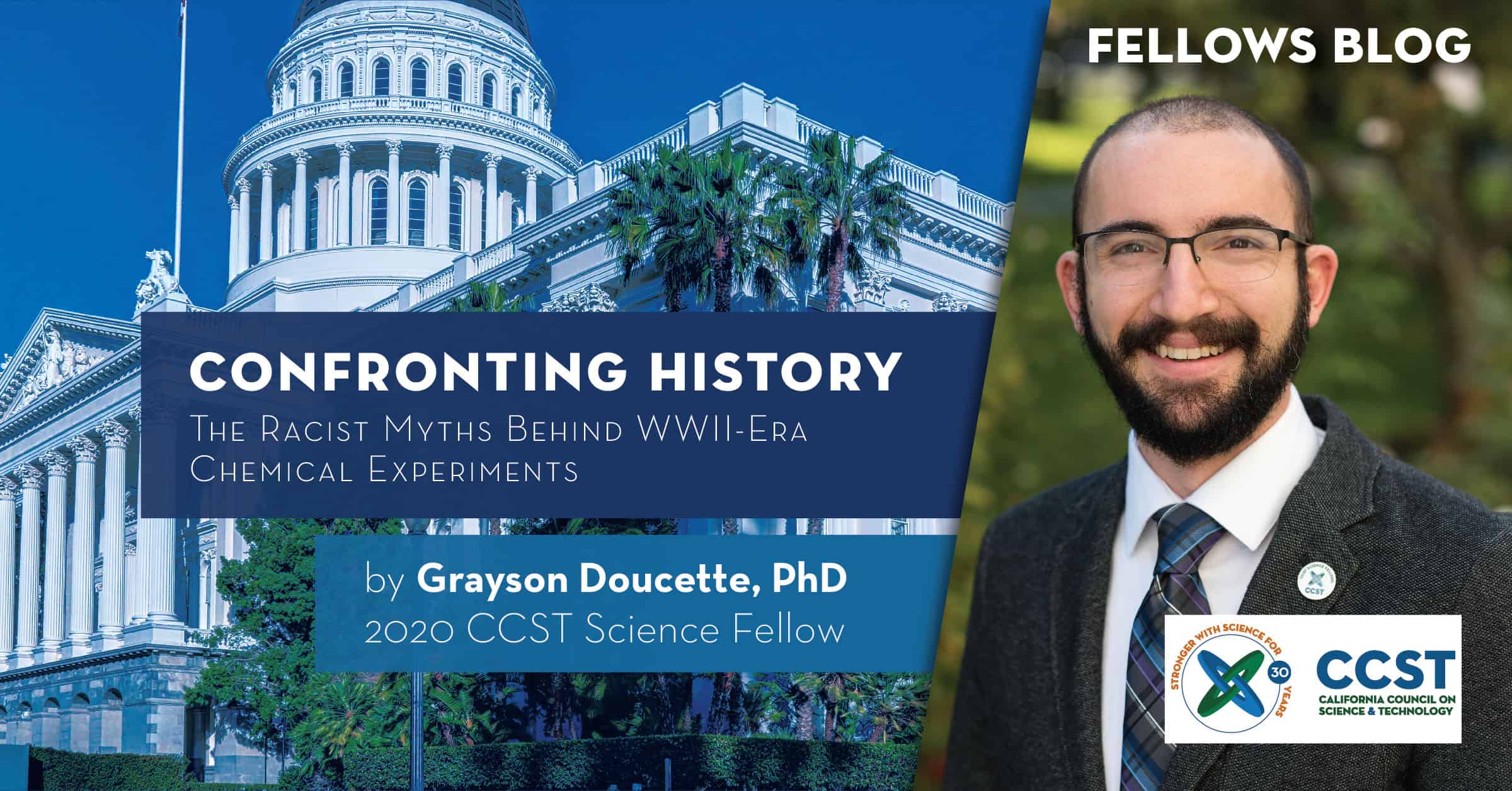 Grayson Doucette is a 2020 CCST Science & Technology Policy Fellow who was placed in ...
Read More

Q&A: COVID-19 Disparities and My Interest in Science Policy 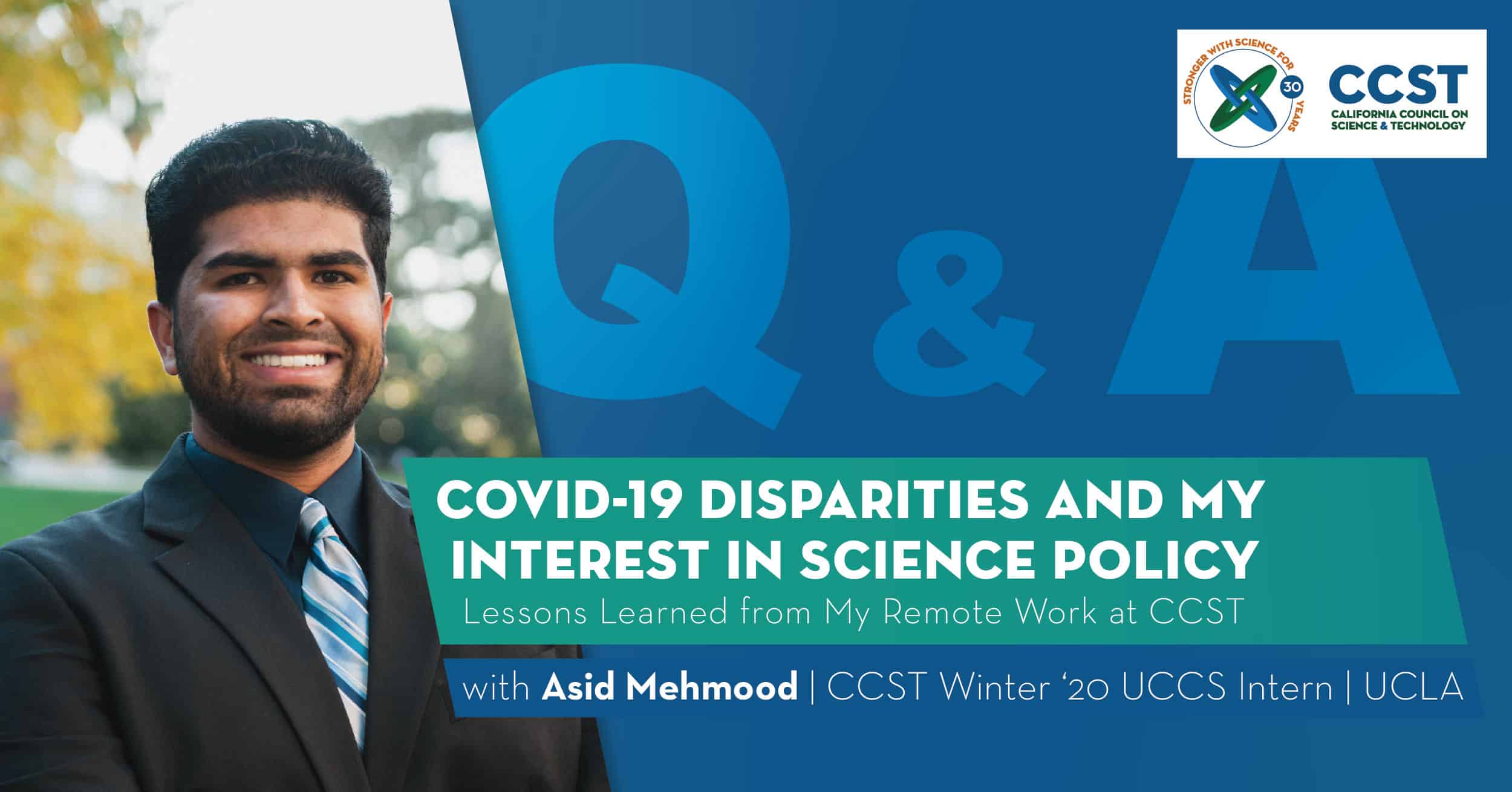 Asid Mehmood is the Fall 2020 intern for the CCST team. He is a visiting ...
Read More 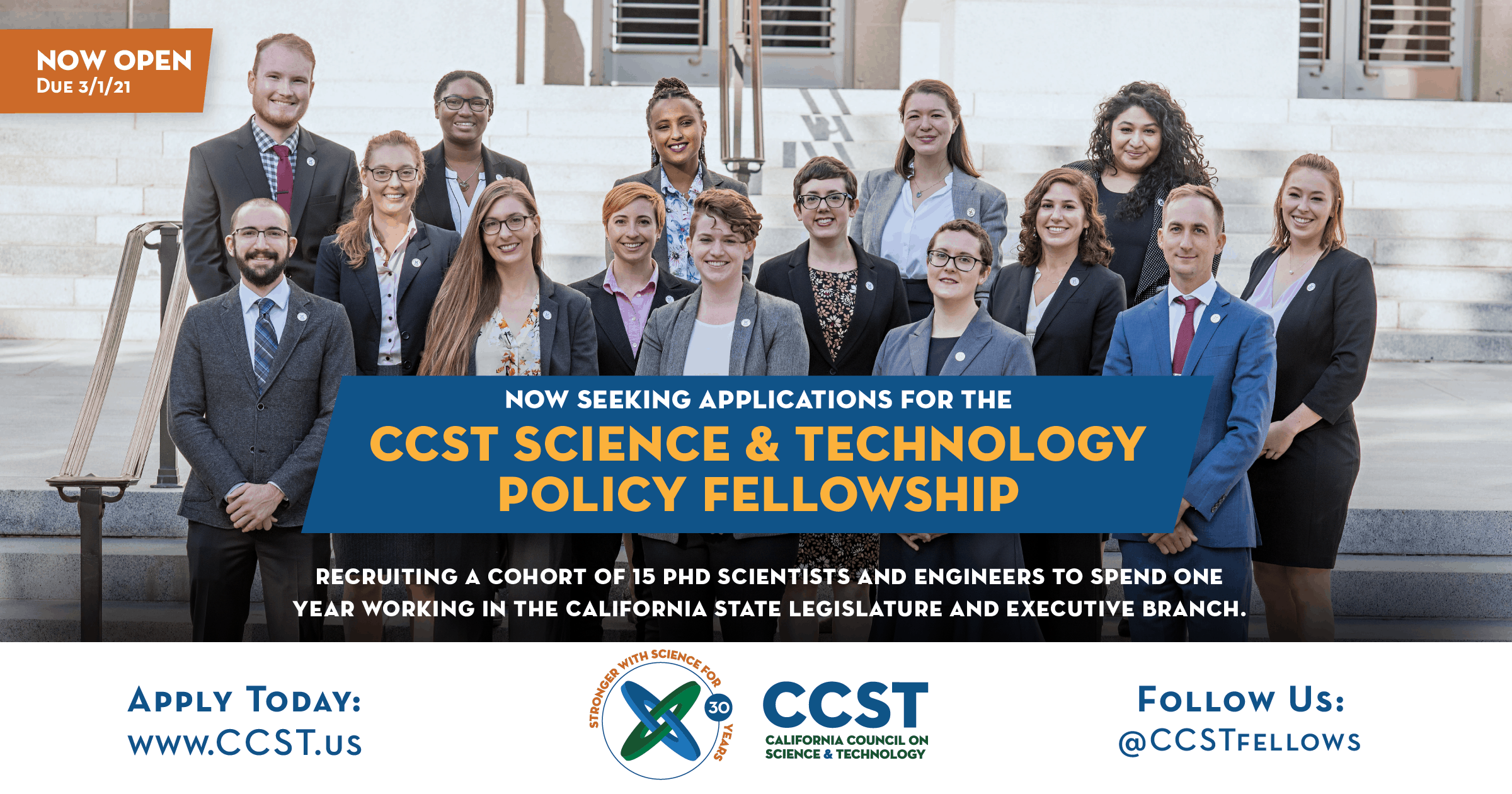 CCST is seeking PhD scientists and engineers for a year of public service and government ...
Read More