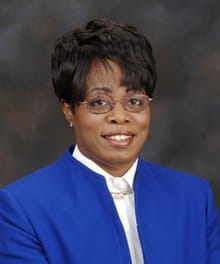 California has long helped shape the nation’s aerospace research and development programs, and CCST Council member Wanda Austin, newly appointed CEO of The Aerospace Corporation, a non-profit based in El Segundo, is helping to continue that tradition.

“Our vision is to be the leading architect of the country’s national-security space program,” said Austin. “Helping to bring current programs to the highest possible levels of operability and reliability while helping to develop the next generation of space systems is central to our efforts.”

Austin was named CEO of The Aerospace Corporation in January 2008. Just two months later she was elected a member of the National Academy of Engineering, which cited her for her leadership in the engineering and integration of national space intelligence systems. She previously was senior vice president of the company’s National Systems Group, which supports the national security space and intelligence community in the acquisition, launch and orbital operation of advanced technology space systems and their ground data stations. Before joining Aerospace, Austin was a member of the technical staff at Rockwell International. She is internationally recognized for her work and has received numerous awards and citations, including the Air Force Scroll of Achievement, the National Reconnaissance Office Gold Medal, and NASA’s Exceptional Public Service Medal. She recently was inducted into the Women in Technology International Hall of Fame. 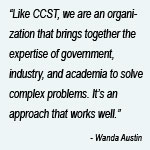 “A lot of what we do focuses on preparing new satellites for launch, including military satellites, and supporting and improving existing networks such as the constellation of GPS satellites,” said Austin. “Like CCST, we are an organization that brings together the expertise and outlook of government, industry, and academia to solve complex problems. It’s an approach that works well.”

The Aerospace Corporation is a private corporation that has operated a federally funded research and development center (FFRDC) for the U.S. Air Force since 1960, providing objective technical analyses and assessments for space programs that serve the national interest. As the FFRDC for national-security space, Aerospace supports long-term planning as well as the immediate needs of the nation’s military and reconnaissance space programs.