The California Legislature has unanimously approved a resolution honoring the California Council on Science and Technology (CCST) for its first 25 years of service to California. Assembly Concurrent Resolution 75 (ACR 75) honors CCST for having “successfully represented California’s science and technology professions at the highest level and providing independent and objective analyses to the state.”

“It brings me great pride to author ACR 75 and pay tribute to CCST for its 25 years of success,” said Assemblywoman Susan A. Bonilla, Chair of the Select Committee on Increasing the Integration of Science Technology Engineering and Math (STEM) in K-14 Schools, who authored the resolution.

CCST is a nonpartisan, impartial, not-for-profit 501(c)(3) corporation established via Assembly Concurrent Resolution (ACR 162) in 1988 by a unanimous vote of the California Legislature. It is designed to offer expert advice to the state government and to recommend solutions to science and technology-related policy issues. CCST is governed by a Board of Directors composed of representatives from its sponsoring academic institutions, from the corporate and business community, as well as from the philanthropic community.

The resolution, which was co-authored by 68 members of the Assembly, notes that CCST has “worked effectively with the 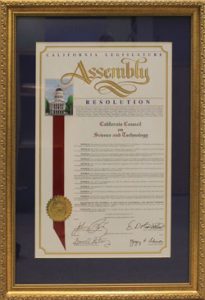 Legislature, the Governor’s office, and many state agencies” to provide analyses on “significant and challenging science and technology related issues in California.” It also notes that CCST has significantly expanded its scope since its founding in 1988, growing to include a formal partnership with six major federal funded laboratories in California, the California Teacher Advisory Council, and the California Science and Technology Policy Fellowships, the first state-level program modeled after the American Association for the Advancement of Science Congressional Fellowships.

“We are proud of the work we have done for California over the past two and a half decades, and look forward to continuing to serve as a reliable source of information and input on science and technology related issues for the State in the years to come,” said CCST Executive Director Susan Hackwood.

Over the years, CCST’s work has encompassed diverse areas ranging from climate change to energy to STEM education.

“The success of STEM education is vital to the continued growth of our state’s economy. CCST has proven to be an effective organization that is committed to strengthening our educational system to meet 21st century workforce needs,” said Bonilla. “I look forward to utilizing their expertise and broad network to advance the goals of my select committee and integrate high quality STEM programs into our state’s schools.”