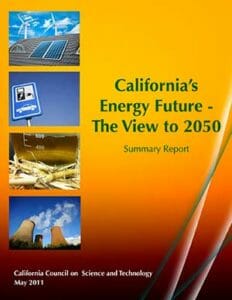 “California’s Energy Future – The View to 2050” looks a generation ahead at what’s required to reach that goal and answers the call of S-3-05, the executive order from 2005 to reduce the state’s emissions 80 percent below the 1990 level by 2050. The good news: The technology to do more with less energy and produce the electricity and fuel we need to get to the 60 percent mark is either in demonstration, or already in use. Pushing on to a full 80 percent reduction in emissions will require significant levels of research, development, invention and innovation, the report states. The total commitment necessary to achieve this accelerated pace will require strong societal and policy backing because there are less than 40 years to make a nearly total change-over to the required technology. Essentially, in this time period, every existing building will either be retrofit to higher efficiency standards or replaced, 60 percent of light-duty vehicles will use electricity, so that the average fuel economy will be roughly 70 miles per gallon. Additionally, the electricity generating capacity of the state will be almost entirely replaced and then doubled, and all with near zero-emission technology. Meanwhile, infrastructure to produce biofuels – costing tens of billions of dollars – will have to be built, biofuel imports must become available, and fossil fuel use will have to decline dramatically.

The report’s conclusion strongly recommends the development of multiple solutions, making it clear that no single approach will take the state to a future nearly free of fossil fuel emissions. Getting to the 60 percent mark, on technology either at commercial scale or in development, can be accomplished through four key strategies:

The report examines a suite of emission-free technologies, some everyday and others exotic. Stringent energy-efficiency standards for buildings and industry, electric vehicles, electric heat pumps, nuclear, solar and wind power, and biofuels are among commonly known clean energy solutions described in the report. Still other methods include carbon capture and storage for fossil fuel electric generation, and eliminating emissions from hydrogen production.

Aggressive new efficiency measures could reduce the demand for electricity by about a third, and for fuel by half. Incentives to electrify transportation and heat production would increase the requirement for electricity, but cut fuel demand by yet another third. Even with these measures, by 2050 California would need about twice as much electricity as we use today and still nearly 70 percent of the fuel consumed today.

California has enough renewable resources, such as geothermal, solar and wind to supply all of the state’s projected electricity needs in 2050, except for the fact that many of these resources are intermittent. When the sun doesn’t shine or the wind doesn’t blow, this power must be backed up or “firmed.” In addition, demand for electricity fluctuates and utilities need to find a way to provide power that matches changing demand.

Emissions from the current approach of using natural gas to firm the power and “follow the load” (matching fluctuating demand with supply) could, on its own, exceed the emission target if California elects to rely predominantly on renewable energy. This means that California must couple efforts to increase the amount of renewable energy with another effort to find ways to match supply and demand without burning natural gas. The report labels this “zero emission load balancing” (ZELB) and suggests load balancing should be required to reduce emissions just like any other energy technology. We will need major advances in energy storage and the construction and management of a smart grid to do this.

Nuclear power can provide constant, reliable emission-free energy with a much lower and more easily met requirement for load balancing. Roughly 30 new nuclear power plants could provide two-thirds of California’s electric power in 2050. However, nuclear waste storage remains a significant problem with existing reactor technology, not to mention public concern, especially in the wake of Japan’s recent earthquake and tsunami disaster. California could continue to utilize fossil fuel for electricity production if we capture the resulting emissions and pump them underground, and the state has many decades of underground storage capacity for carbon dioxide. The report recommends a balanced portfolio that uses some of each of these sources – renewables, nuclear and fossil fuel with carbon capture and storage – and a strong commitment to eliminating emissions from load balancing.

The report revised upwards estimates of the amount of sustainable biomass available to produce energy in California solely from wastes and crops grown on marginal lands, without fertilizer or irrigation, and estimated how much more might be imported from countries such as Brazil. The report identified a large range in possible amounts of biomass that could be counted on for bio-energy without impacting food or water supplies. A mid-range estimate of biomass supply, plus technology advances to produce advanced fuels which would look much like today’s gasoline, diesel and jet fuel, is likely to meet only half the demand for fuel in 2050. If the remaining fuel use is from fossil fuels, the emissions from this source would exceed the 2050 target. Consequently, the report concludes that biofuels are an important part of our future, but California should also be looking to alternatives for low-carbon fuel that do not require biomass.

The problem of getting from 60 percent to a full 80 percent reduction in emissions from the 1990 level will require technologies that are not currently on the market, or even in demonstration. Further, California would require a combination of several strategies to make the target that might include, for example, new energy storage technology, advances in the smart-grid, advances in biofuel technology, new ways to provide low carbon fuels that are not based on biomass, as well as behavior changes that would reduce demand.

California is also a leader in the development of breakthrough, game-changing technology that could dramatically change outcomes, especially beyond 2050. The state leads the world in developing fuel from sunlight and in the prospect of using fusion to produce safe energy without producing a large problem with nuclear waste.

The two-year CCST report summarized in “California’s Energy Future – the View to 2050” was funded by the California Energy Commission, the S.D. Bechtel Foundation and the California Air Resources Board and completed by committee of volunteers from major energy research institutions in the state.