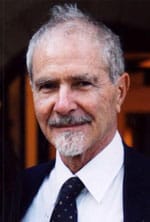 CCST Senior Fellow Dr. David Okrent, Professor Emeritus of Engineering and Applied Science at the University of California, Los Angeles and world renowned nuclear physicist and expert on nuclear reactor safety, died at his home in Los Angeles on December 14, 2012, after a sudden illness. He was 90.

Dr. Okrent obtained his MS and PhD degrees in Physics from Harvard University. He worked at Argonne National Laboratory in Illinois for twenty years, initially focusing on designing the reactor for the Nautilus Nuclear Powered Submarine; later he concentrated on fast reactor physics and safety. While at Argonne, Dr. Okrent also designed the TREAT Reactor, for which he got a commendation from the Atomic Energy Commission. He was selected to serve on the ACRS (Advisory Committee For Reactor Safeguards), which advised the Atomic Energy Commission (now Nuclear Regulatory Commission) on issues related to nuclear safety, in 1963, and continued to serve for on the ACRS for 24 years.

In 1971, Dr. Okrent left Argonne National Laboratory to establish the Department of Nuclear Engineering at UCLA, where he became Professor of Engineering and Applied Science. At UCLA, Okrent and his graduate students utilized quantitative safety goals in researching other environmental risks such as hazardous waste removal and transport, earthquakes, dams breaking etc. He retired from UCLA in 1991, but continued teaching classes and mentoring graduate students for several years after that.

Dr. Okrent received many prestigious awards during his long career: he won two Guggenheim Fellowships (1961-62 and 1977-78), received the first Argonne Universities Association Distinguished Appointment Award in 1970, was elected to the National Academy of Engineering in 1974 (which Okrent considered as the greatest honor for an engineer) and, was the first to receive the (ANS) Tommy Thompson Award for nuclear reactor safety in 1980. He also received the USNRC Distinguished Service Medal in 1985 and the (ANS) Glenn Seaborg Award in 1987. In November 2007, Dr. Okrent was honored by the American Nuclear Society with the prestigious George C. Laurence Pioneering Award.

Dr. Okrent is survived by his three children, Neil, Nina and Jocelyne and by four grandchildren. His beloved wife of 57 years, Rita, died in 2005. A memorial service was held for him on Monday, December 17th at Hillside Memorial Park and Mortuary in Los Angeles.

Later this year, a memorial event for Dr. Okrent will be held at UCLA in honor of his career.