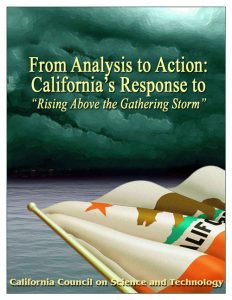 CCST received a request from the Governor asking us to help California respond to the National Academies report, Rising Above the Gathering Storm. The report contains a strong message that the nation’s science and math education and economic environment need serious attention in order to safeguard the future prosperity of the nation.

In response, CCST is preparing a list of “actionable” items with both short-term and long-term components. This activity is being accomplished by convening four industry-led task forces to identify state assets and brainstorm about concrete actions that state government, business and industry, higher education, and federal laboratories could implement to address identified challenges. Industry is the driver of the state’s economy and S&T workforce issues affect industry directly; it is for this reason that CCST, with connections to industry, education, and the federal funded laboratories, was considered an appropriate organization to develop this response and bring CEOs into the task forces.

Each of the four task forces is focusing on one of the National Academies’ main recommendations related to increasing the talent-pool, research base and business climate.

CCST will be presenting initial results from the task forces at the National Academies’ September 2006 Convocation on the Gathering Storm in Washington, D.C., and a final set of actionable items will be delivered to Sacramento later this year.