Measuring the Sierra Snowpack to Predict Water Availability for California 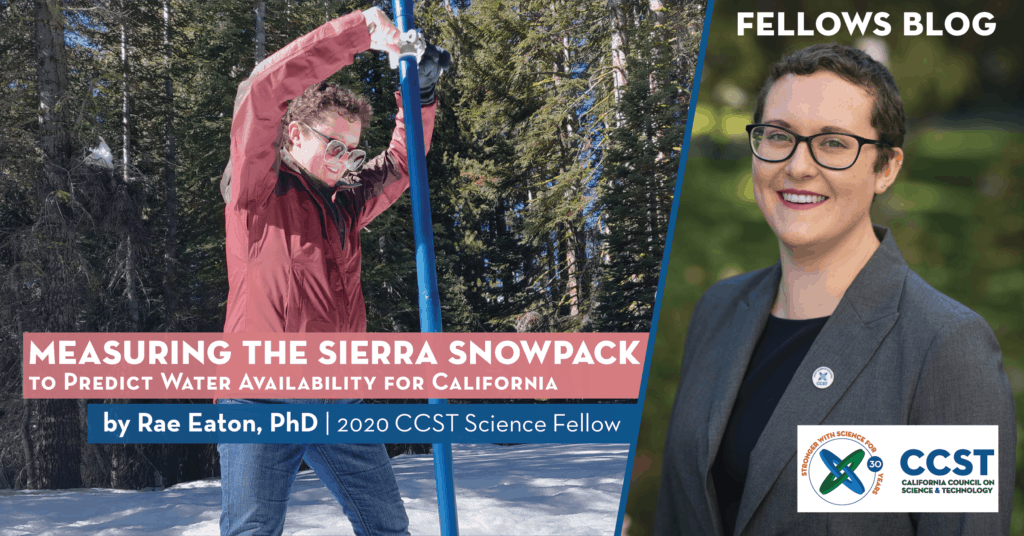 Rae Eaton is currently a CCST Science & Technology Policy Fellow placed in the California Natural Resources Agency. She received a PhD in Chemistry from the University of Washington, where she researched and developed new tools for scientists studying human diseases such as Alzheimer’s. Rae also holds BAs in Chemistry and Biochemistry from Oberlin College. This snowpack measurement took place in February, prior to Gov. Newsom issuing a stay-home order for California. Although opportunities to go on field trips like the one described below are currently on hiatus, the fellows are still actively engaged in the work of their host offices and fellowship programming, albeit remotely.

Did you know that winter snow is connected to how much water Californians will have for the rest of the year? Every winter, western states in the US welcome rainy weather in the valleys and on the coasts in the hopes of seeing snow fall in the mountains. Winter snowstorms bring more than just opportunities to go skiing; they are crucial sources of water during the dry summers. It is critical to know how much water is locked up in the mountains to better predict water availability for California’s homes, farms, and reservoirs and also to manage possible spring flooding.

In February, I and a group of  CCST Science Fellows were led  into the Sierra Nevada on snowshoe, following members of the California Cooperative Snow Surveys (CCSS) program, to see how plunging metal poles into the Sierra snowpack enables us to make these predictions about water availability for the rest of California.

As a Science Fellow placed in the California Natural Resources Agency (CNRA), I hear a lot about these snow surveys; however, it’s one thing to read about the data and the program, and another thing entirely to go outside and participate in sampling. It was fascinating to survey the snow course and follow the same techniques that surveyors have been using for decades to track and manage the snow.

Since 1929, the CCSS program has coordinated state, federal, and private agencies to pool funding and expertise and collect information on the California snowpack. Currently, data from 130 remote snow sensors and 265 snow courses are used to map the snowpack and forecast seasonal water runoff. On a clear day in February, we accompanied members of CCSS, including chief of the Snow Surveys and Water Supply Forecasting section Sean de Guzman, up to one of these snow courses to manually survey the snowpack.

Snow surveys collect two key pieces of information from the snow course: snow depth and weight. The weight of a snow sample determines how much water will be generated from the snow when it melts. The snow depth is combined with the snow weight to give the density of the snow, which is recorded to track changes in the snowpack throughout the season. CCSS measures snow depth and weight at multiple points along hundreds of snow courses across the state to get a full picture of California’s snowpack.

Measuring snow depth and weight is a fairly straightforward albeit physical process. A long metal tube is driven into the snow until it hits the ground. The tube has etched marks that allow the surveyor to determine the depth of the snowpack by how far the tube is under the snow.

Snow surveying is a great example of how the state of California uses science to inform policy. Without the information provided by CCSS, it would be difficult to manage the reservoirs at Oroville or Shasta, or to plan for possible floods in the valleys. As climate change increases the variability in the yearly snowpack, the work of this program will only increase in importance.

Fellow Science Fellow Nikki Soltis reminded me while we were on the snow course that though we may be in policy now, the scientist in each of us still enjoys going into a lab and making measurements. Before the Fellowship, I don’t think we could have imagined a more beautiful lab or a more  entertaining experiment, and definitely not one that had such a direct and immediate impact on California.

Thanks again to Kasey Schimke at the Department of Water Resources and Sean de Guzman, Andy Reising, and Ramesh Gautam of the California Cooperative Snow Surveys program for giving us the opportunity to participate in the survey.