California is leading the nation in reinventing the State’s energy system in response to climate change concerns. However, the state faces significant challenges associated with meeting the emission reductions laid out by AB32, the Global Warming Solutions Act of 2006, while ensuring its economic vitality and secure energy supplies.

“As the state makes critical choices to change its energy system, it needs a clear understanding of the technical potential and risks of various energy choices,” said Jane Long, Fellow, Center for Global Strategic Research and Principal Associate Director at Large, Lawrence Livermore National Laboratory. “California has aggressive goals for reducing greenhouse gas emissions. Meeting these goals will have implications for energy efficiency, renewable energy, energy transmission and distribution, electricity generation, fuels, and land use. We need to understand what these implications are and how best to approach them.” 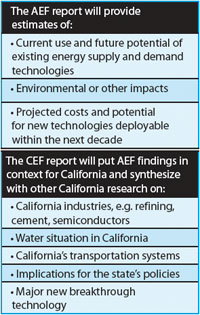 CCST is proposing to conduct a study of California’s Energy Future (CEF) that will draw upon a $3 million national project supported by the National Academy of Engineering, the National Research Council, Dow Chemical, the Kavli Foundation, the Intel Corporation, and the Department of Energy, to study America’s Energy Future (AEF). The CEF study would synthesize the information from the national report along with data available from multiple California sources to provide critical, California-specific information to state and local governments relevant to implementation of the state’s climate goals in energy.

“Interpreting and focusing research from the National Academies for a California policy making audience is an important role for CCST,” said CCST Vice Chair Mim John. “We performed a similar role in 2006 at the request of the Governor for the Academies report, Rising Above the Gathering Storm.”

The CEF study, which will be released in time to impact the 2010 budget, will provide an authoritative, non-partisan analysis of energy efficiency, renewable energy, nuclear power, transmission and distribution, fuels and advanced coal technologies. Among other things, it will estimate their current contributions, future potential, associated impacts, and projected costs. In addition to the AEF report, CCST will draw upon resources from the California Air Resources Board, the California Energy Commission, and the California Public Utilities Commission, which have worked for years to plan and regulate the energy future of the state.

“We are at a crossroads,” said Long. “California has the capacity to be the world leader in new energy technology and the future of energy systems. This study will provide policy makers with the best information possible to fulfill that capacity.”